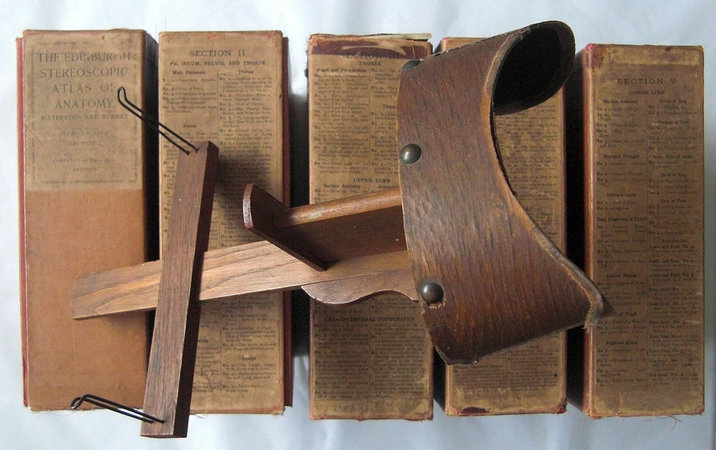 < >
Innovative and compact merging of word and image offering an unprecedented vision of the human body
WATERSTON, David and Edward BURNET.

1907.]. Together five boxes, Sections I-V, 240 x 190 x 80mm, and with the accompanying wooden and metal viewer; I. Abdomen containing 50 thick cards with mounted stereographs on each; II. Perimeum, Pelvis, and Thorax, containing 50 thick cards with mounted stereographs on each, box without the internal cloth tie; III. Thorax, containing 52 thick cards with mounted stereographs (Axilla no 1 stained); IV. Central nervous System, containing 52 thick cards with mounted stereographs (a couple or cards with ink underlining); V. Lower Limb, containing 46 thick cards with mounted stereographs; in all, 250 cards; cards all a little browned and lightly foxed, but otherwise good, stereographs all good; in the original dark pink cloth boxes, all five with title and explanatory labels on fore-edges (labels are somewhat browned, scuffed and faded in places), all five boxes somewhat faded, frayed and worn, with some splitting to joints, Box 3 most noticeably worn; some wear evident on viewer. ‘New edition’ of this remarkable, graphic, and at times gruesome pathological atlas of anatomy prepared under the auspices of the Department of Anatomy at the University of Edinburgh, and of particular appeal in retaining the original wooden and metal stereoscopic viewer, most often now missing. The five ‘volumes’ of boxed illustrations (resembling books with spine titles and designed to fit library shelves), contain some 250 thick cards each mounted with stereoscopic images together with accompanying explanatory text, and provide a vivid, realistic and unprecedented three dimensional view of the entire human body, helping students to gain important insights into the structure and spaces of the body.
The invention of photography had a big impact on anatomical teaching, but, like drawings, was limited by being a two dimensional representation. Stereoscopy in fact predates photography, but its mass appeal depended entirely upon the development of photographic processes. Originally little more than an optical toy, once it was amalgamated with photography it became a uniquely powerful medium. ‘Stereo photography combined the work of two Victorian inventors, Sir Charles Wheatsone and Sir David Brewster, who used photography to popularise their discoveries. Stereo negatives when exposed in a camera produced two almost identical photographs which were then placed in a viewer that enabled them to be seen three dimensionally’ (Powerhouse Museum). Stereographs, double images (taken from positions equivalent to those of the left and right eyes) presented side-by-side on a flat card and looked at through a special viewer, were displayed to great effect at the Great Exhibition in 1851, and quickly became something of a phenomenon. Initially largely for domestic use, the educational opportunities, especially for the medical profession, were soon recognised. Improved photographic technology in the second half of the 19th century further simplified the production of stereographs. The first first atlas of medicine was produced by Albert Neisser (1855-1916), who between 1894 and 1911 produced 57 boxed sets.
The date of the original edition of The Edinburgh Stereoscopic Atlas of Anatomy is unclear though is believed to be around 1905-1906 (based on contemporary reviews, although Roberta McGrath in ‘Seeing Her Sex’ p. 144 suggests 1890), with this, the ‘New Edition’ thought to date from 1907. David Waterston, was a lecturer and senior demonstrator at the Anatomical Department of Edinburgh and prepared the anatomical dissections. The first edition was issued by the Caxton Publishing Company. Over time, it was expanded to ten volumes, that included 324 stereographs, with issues also produced in the US and Canada. An equally graphic ‘Edinburgh Stereoscopic Atlas of Obstetrics’ was issued in 1908-1909, edited by George Simpson and Edward Burnet.