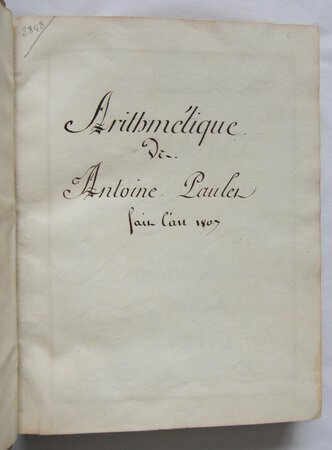 1808. 4to, 234 x 180mm, bound French manuscript on heavy paper, neatly penned in a single formal and legible hand, pp. [iv], 203 (with 122 omitted, 186 repeated, 193 repeated three times), followed by 21 pages with ruled borders but without text but several leaves cut out; followed by 18 blank leaves; with calligraphic title-page and headings, ruled page borders, and one elaborate calligraphic tail-piece flourish; some occasional ink smudges, some light browning and occasional soiling, with some ink burn seemingly affecting a few of the inner ruled borders which now appeared to be ‘sliced’, but otherwise clean and crisp; in contemporary vellum boards, with remains of blue silk ties, covers a little spotted and soiled, extremities lightly bumped. An elegantly written elementary course in arithmetic undertaken by Antoine Paulet of a Nîmes, under the tutorship of the provincial French master, one M. Reumon. The usual topics are covered, including the basic arithmetical operations of addition, subtraction, multiplication, division, the rule of three, some accountancy and business methods, ending with ‘Regle de compagnie’ (fellowship). The manuscript is well organised into sections, often with a brief introduction to the mathematical process or problem, followed by examples and exercises. The blank pages with ruled borders at the end, however, suggest that Paulet failed to finish writing out his lessons.
Cyphering was the main approach to teaching and learning mathematics, and in particular arithmetic, in the 18th and 19th century. Printed books were rarely used, and teachers had manuscript sum books, which they used as teaching aids and which the students copied, often embellished with calligraphic flourishes, ink and wash sketches etc. Whilst attractively and elegantly penned, Paulet has refrained from any additional embellishments in the present volume.