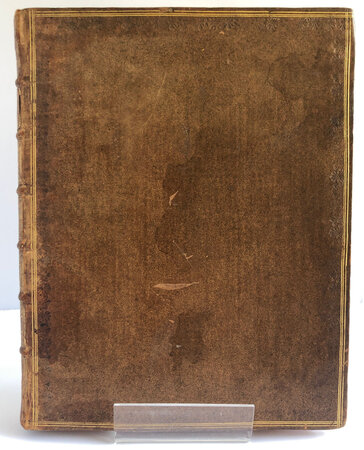 < >
Including one of Newton’s final contributions
ARBUTHNOT, John.

TABLES OF ANCIENT COINS, WEIGHTS AND MEASURES, explain'd and exemplify'd in several dissertations London: Printed for J. Tonson, in the Strand.

1727. 4to, pp. [12] 327 [1] (last page blank), with 6-line errata slip pasted at tail of p. 327; title printed in red and black, with wood or metal-cut decorations and initials, and 18 engraved plates numbered 1–18 (bound at the end, the last double page); some worming in lower margins of text leaves, otherwise a fine fresh copy; First edition of this finely printed quarto - a standard work on Greek, Roman, Jewish and Arabic coins, weights and measures and commerce, including the prices of goods and services and rates of pay. There is also a dissertation on ‘the Navigation of the Ancients’, and an important final section on ancient medicine. This includes the doses given by ancient physicians, and the prescriptions and practice of Celsus, Scribonius Largus, Marcellus, Ruffus Ephesius, Paulus Aegineta and Areteus. The final double-page plate 18, ‘The Assays Weights & Values of Several Foreign Silver Coins ... Gold monies unworne’ is attributed to Sir Isaac Newton, during his tenure as Master of the British Mint (1700-1727). During his time he issued at least thirteen similar reports, and this appears to be among his very last original works accomplished during his lifetime.
Arbuthnot took his MD at St Andrew's in 1796; he was elected FRS in 1704 and admitted to the Royal College of Physicians in 1710. A friend of Swift, who called him the ‘queen's favourite physician,’ and a supporter of Newton, he was close to the leading statesmen of the Harley administration and was the author of the Art of Political Lying ‘one of the best specimens of the ironical wit of the time’ (DNB). He published the first work in English on probability, Of the laws of chance (1692), a translation and expansion of Huygens’ work.
There is a dedicatory poem to the King by the author's son Charles, a student at Christ Church, Oxford, for whose benefit the work was published.
Aside from Newton’s Assay table, which was prepared for the present work, the tables themselves were first published in 1707, according to Arbuthnot in his preface ‘which being out of print, it was suggested to me that if I would give the copy, with some other calculations relating to the same subject, to my son, he might make some profit of them’. ESTC t96634 and n65572; Goldsmiths'–Kress 6495; Wallis, 357; Wellcome II, p. 52.