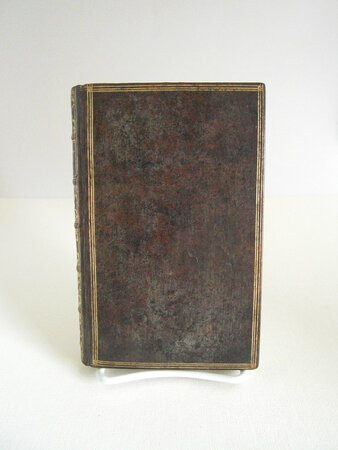 [1640.]. 8vo, pp. [xiv], [ii] blank with engraved armourial coat of arms on verso, 171, [4], Privilege du Roi (dated April 20th, 1640), [1] blank; pp. 103-9 inserted folding astrological charts; title-page somewhat browned with dampstain along gutter and which is evident throughout, though varying in prominence, with some further occasional dampstaining to upper margins, browned throughout due to paper quality, a few headlines shaved close but without significant loss; with a small number of contemporary annotations in brown ink on the margins of a couple of leaves; First edition of this rare and little known early work by Martine Bertereau, Baroness of Beausoleil (fl. 1600-1630), considered to be the first female geologist.
Little is known about the early life of the baroness de Beausoleil. Born in around 1590, Martine de Bertereau came from a noble family, though her exact place of birth is uncertain. She clearly received a quality humanist education however, and in 1601 married Jean du Châtelet, Baron de Beausoleil and Auffembach. Du Châtelet was a Belgian metallurgist, alchemist, and prospector, and inspector of mines of the German empire, and for some fifteen years they travelled together across both northern and southern Europe visiting mines, even venturing as far as South America. His alchemical experiments engaged upon during a prospecting trip to Brittany in 1628 prompted his arrest on charges of sorcery. He was released after a short term in prison, but his apparatus was destroyed. Between 1630 and 1634 they were commissioned by the superintendent of mines, to survey the French provinces in search of new mineral veins. A failure to be reimbursed for some expenses incurred, however, may perhaps have prompted Martine to pen her first work in 1632, ‘Veritable declaration de la decouverte des mines et minieres par le moyen desquelles sa majeste et sujets se peuvent passer des pays etrangers’. This was followed in 1640 by the present work, further discussing their joint work. Written in the form of an appeal to Cardinal Richelieu to open and operate the French mines, it contains discussions on their travels, provides a long list of mines visited, and discusses the minerals found.
‘She presented two memoirs to the French court to inform the king how he could make himself and his country more independent of other countries by using the mineral resource of France. She never received a response to these reports, and apparently the couple’s persistence annoyed Cardinal Richelieu to the extent that he had the pair imprisoned in the Bastille, where du Châtelet died in 1645 ... After her husband’s death, Martine and her daughter Anne were imprisoned at the Château de Vincennes. According to Mozans, the baroness’s memoirs discuss various types of mines, the assaying and smelting of ores, and the general principles of metallurgy. She also provides a description of the qualifications of a mining engineer - a person who was knowledgeable in chemistry, mineralogy, mechanics, and hydraulics. She assured her readers that she devoted thirty years of study to these branches of knowledge’ (Ogilvie, I p. 119). Martine is credited with having discovered some 150 ore deposits and water deposits through a variety of hazel and metal divining rod, although this, together with her shared interest in alchemy, eventually led to accusations of witchcraft and their imprisonment, and she too died in captivity, as her husband had done.
Though clearly of significance to those interested in mineralogy and metallurgy, it is interesting to note how much importance Bertereau places upon the need for a good understanding of astrology - one of the vital skills required by a mining engineer she believes. Seven woodcut charts are included, and the stars, she believes, are directly connected with and govern the developing metals in the earth. Touching upon her alchemical believes, she expresses her belief in the universal spirit of life, responsible for the growth and reproduction of all things, including precious metals. From these metals, she notes, the ancient philosophers prepared their Grand elixir which could treat incurable illnesses, and purge metals of their imperfections. In her discussions about the importance of seeking new mineral reserves both at home and abroad, she touches upon the explorations of Christopher Columbus.
Though condemned in her lifetime she was undoubtedly a serious woman of science, and her conclusion’s were deemed important enough to be reprinted over 100 years later, in the second volume of Barba's Metallurgie, ou, l'Art de tirer et de purifier les Métaux, Paris, 1751, 2, 56-151. Alic, p. 114; BM STC French; 663; Dorbon-Aine Bibliotheca Esoterica 298 ‘very rare’; Eleanor Elder, “Women in Early Geology” (Journal of Geological Education 30, 287-293); Ferchl 40; Freilich Sale catalogue, 53; Klinckowstroem (Divining) 40; Mozans, Women in Science, 1991, pp. 238-40; Roller-Goodman. I, 108, the catalogue of the history of science collections of the University of Oklahoma libraries; Ward & Carozzi, Geology Emerging, 190; not in Hoover, Bibliotheca de re metallica; OCLC locates copies at the Smithsonian, the Newberry Library, the Chemical Heritage Foundation, Smith College, Illinois, Oklahoma.