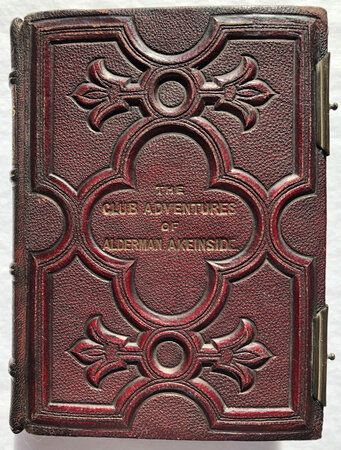 ALDERMAN AKEINSIDE'S 'BIT OF DINNER, AT THE CLUB'! [upper cover: The Club Adventures of Alderman Akeinside]. [colophon:] Published by B & Co London (Wholesale). Protected by Copyright. [n.d. but ca. 1860

-1870s.]. 8vo, carte de visite photograph album, ff. 15 leaves of thick card, with images on both recto and verso, and comprising a lithograph introductory text within a garland border, followed by 28 numbered albumen print photographs of comical drawings, also within matching garland borders, each with lithographed text mounted below, the ‘windows for each surrounded by chromolithograph triple gilt ruled border; somewhat dust-soiled throughout with some marginal staining, first window previously torn but now repaired, the photographs all a little faded, more so towards the end, top corners of each card clipped for easier insertion into windows, small tear at tail of ff. 2, with further light wear and occasional minor tears to each, and cards a little awkward to remove; bound within the original elaborate blindstamped red morocco album, though now considerably darkened appearing almost brown, upper cover lettered in gilt 'The Club Adventures of Alderman Akeinside', sympathetically newly rebacked to style with new endpapers and later morocco label, spine with raised bands, all edges gilt and with inner gilt dentelles, with remains of brass clasps; a most unusual and appealing ephemeral item. A wonderful and somewhat curious piece of mid to late Victoriana, and seemingly a rare production. We have so far been unable to find any record of ‘B & Co. London (Wholesale), and have only found two copies held by Institutions, and none in the UK.
Presented as a carte de visite photograph album, the work contains 29 ‘cartes’, the first of which is a lithograph introductory text, followed by 28 numbered albumen print photographs of comical drawings illustrating the gluttonous night-out of Alderman Akeinside at his club, his inebriated return home, and his final consultation with Dr. Sloe and Mrs. Akeinside. Though slightly hard to remove from their ‘windows’ (each framed by a gilt ruled border), each card has the imprint 'Published by B. & Co. London (Wholesale)', within a circle on the verso, though undated. Harvard hold what is presumably the original manuscript version, and which they date to 1850, and which contains ‘pen, pencil and watercolour’ drawings, each signed ‘GB’ or ‘GBR’. Toronto holds a copy of the present later version including the albumen carte-de-visite prints, most probably photographs of the original album held at the Houghton, and which they date to 1860.
From the Introduction: 'August ye 12th. 18-- Dine at the Club tomorrow ? Of course I shall, whoever heard of such a thing ? Mrs. A. wont eat turtle, never did: I dont like Ice: because I once fell into the Serpentine: no wonder she dont know the difference between Turtle and boiled Goose!! Some people dont know the difference between a sheeps head and a Carrot!'.

Bibliography: OCLC locates only three copies at Massey College, Toronto, Yale British Center for Art, and Harvard, with no copies located on COPAC.