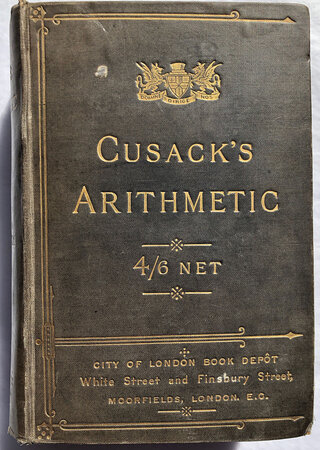 1901. 8vo, pp. xvi. 727, [1] blank, [4] advertisements; with a number of engravings and diagrams within the text; lightly browned throughout, with some occasional soiling and staining; one or two contemporary pencil calculations within margins; final advertisement leaf soiled and creased, and with tear at upper margin of final free endpaper with small loss; Uncommon second edition (first 1896) of this detailed and extensive text book, one of a series of works issued by James Cusack, and providing an insight into the provision of mathematical education at the turn of the century.
‘The present work is not intended as a first book on Arithmetic; it is intended for students already acquainted with methods, but who look for a rational explanation of those methods, and of the principles underlying them ... Throughout the work I have kept constantly before me the needs of the large number of young students scattered over the rural districts, who have little or no opportunity for receiving oral instruction in this important subject. Should any such student find any of my explanations insufficient, on receipt of a letter to that effect I shall be pleased to send whatever further explanation may be necessary’ (preface).
S. Blows in his 1890 ‘Cusack’s Principles of Logic, prepared expressly to meet the requirements of the syllabus for certificate students’ (second edition), describes Cusack as a London Professor, and we believe that for some time he ran a private school in the city. Indeed the preface is signed by Cusack at ‘Day Training College, Moorfields, London, E.C.’ He produced a series of textbooks, all published by the City of London Book Depot, together with a number of boxed education kits, to be used in conjunction with the accompanying text-book. He appears to have worked in collaboration with not only S. Blows, but with Henry Armstrong, who penned ‘Cusack’s Solid Geometry’, which was to be used alongside his ‘Geometrikon’ boxed set.
Other sets were produced to aid the teaching of drawing and shading models, with OCLC locating later 20th century publications on topics such as double-entry bookkeeping, (1911) and ‘the arithmetic of the decimal system’ (1920). OCLC locates copies of this second edition at the BL and Leicester only, with the first edition noted at Trinity College and the National Library of Scotland.

Condition: in the original publisher’s cloth, ruled and lettered in gilt, inner hinges split but holding, small nick at head of spine, spine a little sunned and creased, covers lightly soiled and scuffed, extremities bumped and worn; a sound copy.