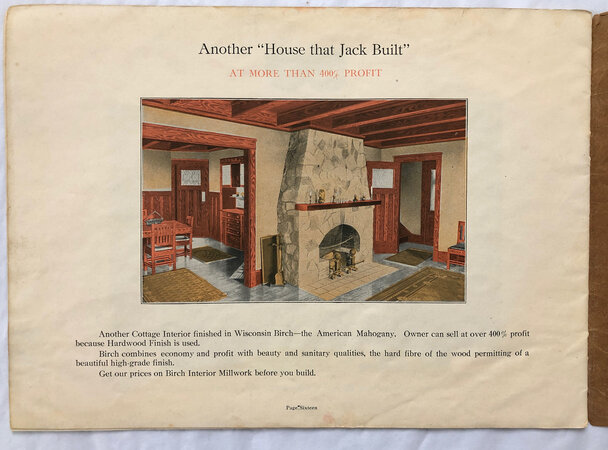 “THE HOUSE THAT JACK BUILT” or the cost of hardwood versus softwood. The Actual Experience of a Home Builder. [The Heidritter Lumber Co. Elizabeth, New Jersey.] n.p. but presumably New Jersey, n.d. but ca. 1920-

1940.]. Oblong 4to, 192 x 270mm; pp. 16; text printed in red and black; illustrated throughout including some chromolithograph; some light browning and soiling, with faint hint of previous dampstaining though insignificant; stapled as issued in the original brown card wrappers, embossed and printed in red and green, upper wrapper with window, staples slightly rusted, covers a little soiled and creased, with small tear at tail of upper cover; a good copy. A scarce and striking trade catalogue issued by the New Jersey Heidritter Lumber Company and which extols the virtues of using hardwood over softwood in the construction of a house. The embossed upper cover proclaims ‘400% profit on “The House that Jack Built”’, and states that though hardwood may initially be more expensive, that the long term rewards will be significant. In particular it focuses upon the use of ‘Wisconsin Birch - the American Mahogany’. The catalogue also includes "Korelock" doors, patented in 1923, and manufactured by the Paine Lumber Company of Oshkosh, Wisconsin. The Heidritter Co., at one time operated seven saw mills and owned over two hundred and twenty-five square miles of timber lands at Quebec, Canada. This trade catalogue is seemingly unrecorded.