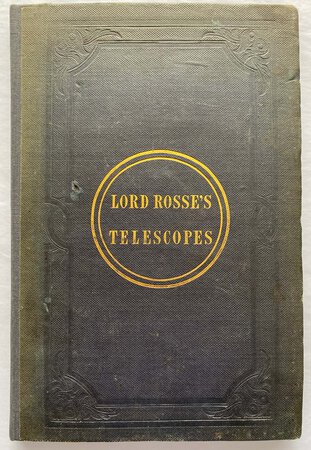 1844. Small 4to, pp. [ii] blank, [ii] title-page, iv, 54, [2] publisher’s catalogue; with lithograph frontispiece, three numbered lithograph plates, and four engraved text figures; paper a little browned, with some foxing along title-page gutter, and sporadically throughout with some occasional faint soiling; with two loosely inserted items, one a pencil inscription referring to optical works, the other a typed letter addressed to Sir Charles Parsons on headed Grubb Parsons paper dated 1929; in the original dark blue blindstamped cloth, with title title within roundel on upper cover, neatly recased with new spine and endpapers, covers a little sunned and stained, small nick to upper cover, with light wear to extremities and corners; from the library of Grubb Parsons’ chief optical engineer David Sinden, with the Grubb Parsons & Co., address stamp at head of first blank; overall a very good copy. Second edition, (first also 1844), and a nice association copy, of this important and early contemporary account of the recent astronomical advances being made by William Parsons, third Earl of Rosse (1800-1867) on his estate of Birr Castle near Parsonstown in Ireland. Parsons had long been focused upon the idea of constructing a large telescope and worked for five years to find an alloy suitable for the mirror. His mirrors were made of speculum metal, an alloy of approximately two parts copper to one part tin by weight. Adding more copper makes the mirror less brittle, but is more susceptible to the development of small surface fissures during the cooling process, an tarnishes faster. After much experimentation he succeeded in casting and cooling a three foot mirror, and so in 1842 he began work on his ‘monster’ six foot mirror. The present work provides an account of these experiments, which eventually saw the installation of his ‘Leviation’ with the six foot speculum, and which was at the time the largest in the world. The telescope had a focal length of fifty-four feet and with it he was able to make detailed studies of nebulae, took some of the earliest lunar photographs, and was the first to detect the spiral nature of some nebulae. The ‘Leviation’ was immediately treated as something of a marvel and became a tourist attraction, and Wood’s account no doubt did much to inspire this.
The present copy was once in the collection of David Sinden, chief optical engineer at the noted manufacturers of optical instruments Sir Howard Grubb, Parsons & Company, based in Newcastle-upon-Tyne. The company was first founded in Dublin by Thomas Grubb in 1833 as the Grubb Telescope Company. During the 19th century it produced a number of famous telescopes including refractors for the Vienna Observatory, the Melbourne Observatory and the Royal Observatory in Greenwich. Sir Charles Parsons acquired the company in 1925, and loosely inserted is a letter addressed to him and signed by the manager C. Young and dated 1929. Young tells Sir Charles about the purchase of the present copy from Sotheran’s. It also mentions that Young will meet with ‘Dr. Lockyer’ at Sidmouth ‘to discuss the new mounting’. Sinden later founded the Sinden Optical Company, and many of his fine instruments may be found in observatories world-wide today.