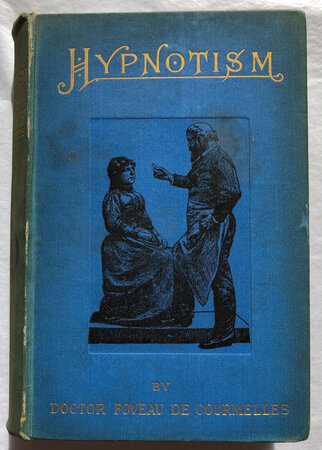 1891. 8vo, pp.xii, 321, [1] blank, [2] advertisements for works by Alphonse Daudet; with 42 engraved vignettes; paper a little browned and spotted throughout due to quality, rear endpaper partially detached, both somewhat foxed and browend; First London edition, (first published as L’Hypnotisme’ in the previous year, with a Philadelphia imprint also in 1891) of this vigorous defence of hypnotism, by the physician-hypnotist and one of the pioneers of electrotherapy and radiography, Victor Foveau de Courmelles (1862-1943), and who only two years previously had been Vice-President of the International Magnetic Congress for the Study and Application of Human Magnestism to the Relief and Care of the Sick, held between 21-26 October 1889 in Paris. Courmelles asserts that a more widespread adoption of artificially induced sleep would be great medical benefit, and indeed in his preface cites the case of a young woman, who during an ‘acute attack of nervous suffocation’ was subjected to the trauma of a tracheotomy: ‘had he simply induced artificial sleep, her breathing would at once have resumed its normal condition’ (p. viii). Amongst the striking illustrations we are shown 'Mesmer's Tub', 'Puysegur's Tree' and numerous hypnotic subjects in various states including one full page image of woman with rigid catalepsy between two chairs.

Condition: original pictorial blue publisher’s cloth, title in gilt on upper cover and spine, with vignette on upper cover of a woman being hypnotised, with floral endpapers, inner hinges starting, head and tail of spine bumped and lightly worn, spine sunned and a little creased, both joints nicked and worn, covers foxed and soiled.