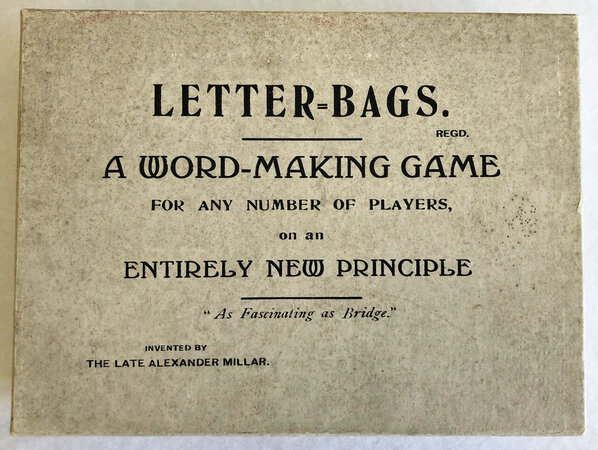 LETTER-BAGS. Regd. A word-making game for any number of players on an Entirely New Principle. “As Fascinating as Bridge”. Invented by the late Alexander Millar. [n.d. but ca.

1920s?]. Consisting of one lidded card box 115 x 160m, containing within four separate lidded boxes 75 x 55mm; complete, each box containing a set of 90 different coloured lettered squares in white, blue, pink and yellow (of which five are blank in each set); upper lid of each with printed text giving the numbers of individual letters; sets bright and clean; some light soiling to boxes; seemingly without the original blue cloth ‘caller’s bag’ usually missing; A lovely bright set of this appealing game, similar in vein to scrabble, and seemingly the brainchild of two entrepreneurial sisters in Dublin. The game consists of a box containing four separate boxes, each of which contains 85 small square cards with letters of the alphabet printed on both sides, together with a further 5 blank cards ‘to replace lost letters’. The four sets are printed in different colours: white, blue, pink and yellow.
The present set retains the original instruction leaf: ‘The object of the game is to form as many and as long words as possible out of each of the sets of letters supplied ... each set contains 85 letters, the proportional quantities of each letter being the same as used by printers. Each set is kept in a small box or bag, with a larger bag for the “Caller”’. Each player takes a set, except for the “Caller”, who keeps his set n a bag ‘from which he draws them one by one at random’. As each letter is called, the player takes the corresponding letter from his set, and places them ‘in not more than six vertical or horizontal columns, endeavouring to arrange them so as to form complete words, reading vertically downwards or horizontally across’.
According to the main lid, the game was ‘invented by the late Alexander Millar’, but as the instruction leaf reveals, and as previous examples handled have revealed, the marketing and distribution of the game appears to have been undertaken by two sisters. For this present example, the printed note states that the game could only be obtained from ‘Miss M. I. Drury’ of 2 Royal Terrace, Kingstown, Co. Dublin. An old address of ‘Farnagh, York Road’ has been crossed out in brown ink. Previous examples handled have had printed instructions noting that copies were available from ‘Miss O. H. Drury, Farnagh,, Kingstown, Dublin’. Our assumption is that this is a later version, and that for some reason Miss O. H. Drury was no longer involved in the enterprise. The existence of what we believe to be earlier sets suggests therefore that the game proved relatively popular. The price of the sets appears to have changed over time, varying from ‘Price 1/8 per set. Postage Extra. 1 set 4d., 2 sets 5d., etc’, through ‘2/6 set post free’, to the present set available for ‘3/6 per set, post free’. Other sets located in the Ballam Collection and at the National Trust Museum of Childhood. Only the Ballam collection set appears to retain the original blue callers’ bag. Sets located at the National Trust Museum of Childhood, in the Ballam Collection at the Bodleian, and in the Osborne Collection at Toronto.