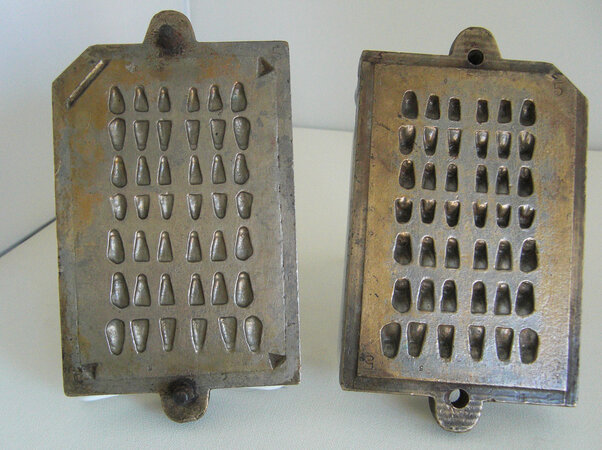 DENTAL MOULD FOR INCISOR AND CANINE ARTIFICIAL TEETH cast in solid brass and comprising the two opposing impressed halves. Stamped with the nos 5. n.p. n.d. but presumed to be English and ca. early 20th century.

1920. Solid brass mould, inner plate 125 x 82mm, set within outer brass frame one side with two locking pins, the whole 160 x 93 x 25mm; signs of light wear and burnishing, though impressions barely warn and still clear and pronounced, upper surface with some abrasion; a heavy item weighing 2.5kg. Original brass mould with 42 impressions for incisor and canine teeth - seemingly for both both primary and secondary teeth. Sadly the manufacturer is anonymous, though we believe it to be English. The only identifying feature is the number 5, indicating this to be one of a series of similar plates.
The history of dentures and artificial teeth dates back to the Etruscans, and were traditionally made of wood, ivory, and indeed human teeth - a practice which lasted well into the 19th century. The 18th century saw the development of porcelain artificial teeth and dentures, though these were prone to chip and could be ‘noisy’. The nineteenth century saw significant improvements, thanks largely to the work of S.S. White in the US, and Claudius Ash in London. Porcelain was replaced by Vulcanite, with the 20th century eventually seeing this replaced by acrylic resin and other plastics.
Brass moulds came into common use during the 19th century, and were considered preferable to plaster of Paris moulds, being more durable and producing more uniform and better teeth. As Paul Goddard noted in his classic work of 1844 ‘The Anatomy, Physiology and Pathology of the Human Teeth’, it was important to ensure that the ‘cavities in which the teeth are to be moulded, must be one-fifth larger than the tooth wanted, as the body shrinks in that proportion in baking’ (p. 162). The moulds would oiled and then filled with the prepared paste. ‘The cavities are not only to be filled, but a redundancy is left projecting, which is to be squeezed out by putting the back of the mould on and squeezing it in a vice’ (ibid).