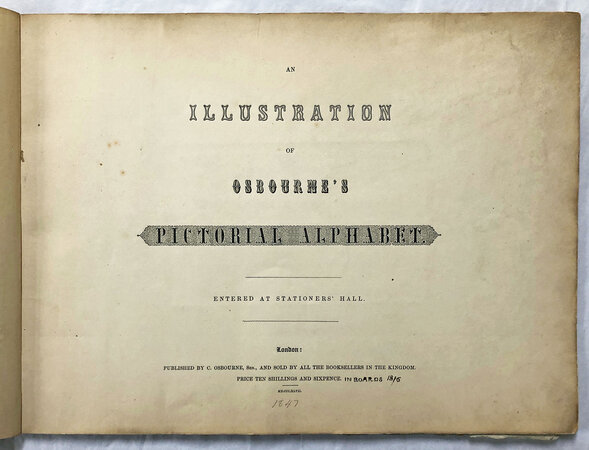 AN ILLUSTRATION OF OSBOURNE'S PICTORIAL ALPHABET Entered at Stationer’s Hall. London: Published by C. Osbourne, Sen., and sold by all the Booksellers in the Kingdom. Price Ten shillings and sixpence. [added in mss- In Boards 13/6].

1847. Oblong folio, 282 x 391mm; ff. [vi], title-page, dedication to Queen Victoria, and list of illustrations, followed by four leaves of thin card on which have been steel engraved title card, blank presentation card, and 26 steel engraved letters of the alphabet; each leaf, including text leaves, retaining original tissue guard, though somewhat creased and foxed in places, with a number of marginal tears; title-page with some marginal browning and soiling, with further light soiling, foxing and spotting throughout, the first blank leaf considerable creased nicked and torn with loss along upper margin; in the original limp dark green thin card wrappers, with possibly later green cloth spine back, inner hinges cracked but holding, head and tail of spine lightly worn, some light surface and extremities wear; The scarce landscape folio edition of a previously issued set of attractively steel engraved alphabet cards, and which first appeared in 1835. Each letter of the alphabet has been hidden within an ornately designed classical or mythological scene, and designed by Charles Osbourne when he was sixteen years of age, and were then engraved by Henry Wallis (c. 1805-1890).
Sold originally as a small boxed set of cards 76 x 76mm, together with an accompanying booklet providing a description together with some poetic extracts, the engravings are here printed on four sheets, and include the original title-card, a blank ‘Presentation Card’. For ‘A’ we see ‘Cupid in the Act of bending his Bow’; ‘G - A Greek Galley, on the River Tiber, with Troops on Board’; ‘I - Ancient Forum at Rome, Trojans Column’; ‘N - A Bearer of the Imperial Roman Eagle, wounded, leaning on his Spear’; ‘U - A View of Tivoli’; and ‘Z - Death’. The edition is once again dedicated to Queen Victoria (though who had in 1835 still been Princess Alexandrina Victoria).
Another issue of the boxed cards was released in 1839 (and previously handled by us), and auction records note a further version of 1843 in which the letters had been mounted on thin card of different colours within wide embossed borders, and with a dedication to Prince Albert and bound in velvet covered boards (and now at Toronto). Other copies cited note the booklet having been printed in a variety of colours. Clearly an entrepreneurial man, or perhaps out of necessity, the present landscape folio version appeared four years later, although only we have so far located only one other copy at the V & A.
The London Gazette of 1838 (p. 778) gives some clue as to the possible explanation for Osbourne’s dogged attempts to sell his work. It transpires that he had recently appeared before the Warwick County Court and had ended up in the debtor’s prison. He is described as being formerly: 'General Dealer and Manager of the Magna Charta Steam Packet' in Hull, 'General Merchant' in Liverpool, 'Vendor of the Pictorial Alphabet',elsewhere in Liverpool, 'General Dealer' while lodging at multiple addresses in Middlesex, and most recently a lodger in Leamington, and 'out of business'. The imprint on this edition adds the suffix ‘Sen.’ after ‘C. Osbourne’ - though whether this means that he had now become a father himself, or that perhaps his own father was helping him to clear his debts, we have no way of knowing.
The engravings are by Henry Wallis (c.1805-1890): brother to Robert and William Wallis, both also engravers (Robert particularly associated with Turner), he suffered attacks of paralysis and had to give up engraving, becoming a picture dealer instead and running a successful gallery in Pall Mall.

Bibliography: Muir, Children’s Books of Yesterday, item 24, p. 11 for a set of the boxed cards; OCLC notes only the V & A for this 1847 edition; all copies of the cards now rare, with OCLC noting copies at the V&A, the BL, British Columbia and at the Osbourne Collection at Toronto (three of which appear to be incomplete).