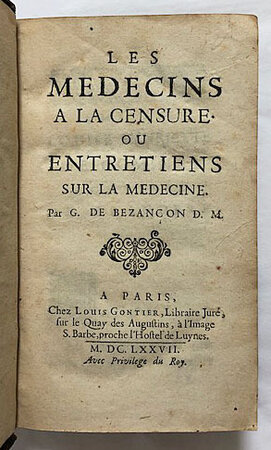 1677. 12mo, pp. [xii], 370, [2]; with small printer’s device on title-page signed ‘DF’, and woodcut head-pieces and initials; small wormhole in lower outer margin running from title-page to p. 190, with some occasional minor spotting and soiling; contemporary calf, spine in compartments with raised bands, ruled and lettered in gilt, with red sprinkled edges, head and tail of spine chipped and worn, exposing headbands at head, upper joint split at tail, covers a little scuffed, corners worn; contemporary bookseller’s ticket of Laurent d’Houry, Paris, on front pastedown, contemporary ownership inscription on front free endpaper, and later bookplate of Dr. J. Pyenneville, Rouen. First edition of this series of philosophical dialogues between Cariste, a cleric and advocate, Cleante, a gentleman, and Sosandre, a well-known doctor. Inspired by, and indeed citing the works of Molière, most notably ‘Tartuffe’ and his ‘Malade Imaginaire’ (during a performance of which in 1673 Moliere fell ill and later died), the three main protagonists partake in a series of satirical exchanges during which Sosandre defends his profession. The author Bezancon, himself a physician and the author of two further works, insists that he is no apologist for medicine, however, and that the reader must decide for themselves whether Sosandre’s replies are reasonable. A number of philosophers, both ancient and modern, are cites throughout including Montaigne and de Thou.
The work was translated into Italian in the following year.