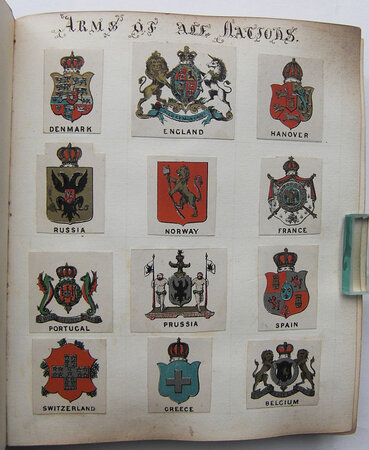 1870s.]. 16mo, plain notebook, ff. 51 leaves of which 32 have been used, leaves neatly ruled in pencil to form a table of 12 spaces, and containing 615 mounted examples neatly clipped from contemporary note-paper and stationery in various colours, some printed and some embossed, and neatly organised into groups, under florid manuscript headings; some leaves possibly excised; light marginal soiling and foxing throughout, otherwise clean and crisp; Quite an extensive and well-organised Victorian collection of arms, crests, monograms, flags, and pictograms, neatly clipped from contemporary stationery and mounted into an attractive bound volume. The anonymous compiler has divided them into groups, under florid ink manuscript headings: Arms of All Nations; Royal Arms; Archbishops 1070-1862; Dukes; Marquesses; the University of Oxford; the University of Cambridge; Army; Navy; Arms of Scottish Clans; and The Arms of the English Counties. Other untitled sections include a number of ensigns; the livery companies of London; other military regiments; and a further section of Oxbridge colleges. One of the blank leaves has a faint pencil heading ‘Counties’, though remains unused.
Whilst somewhat forgotten and overlooked today, during the Victorian era the collecting of arms, crests and monograms was a popular pastime, and indeed a number of leading publishing firms such as Marcus Ward & Co.; Stafford Smith & Co., William Lincoln (subsequently William Simpson Lincoln), and Stanley Gibbons & Co., produced dedicated crest albums to house Crested stationary made its appearance in England after the introduction of uniform penny postage in 1840, thus creating, in addition to waxed seals, two additional collectibles - postage stamps and crests embossed and printed on envelope flaps. These were soon to be found also on letterheads of gentlemen’s clubs, hotels, civic authorities, and commercial stationary. The earliest crest albums date from around 1862, and at the time sets of crests were also produced for collectors. The pastime appears to have been firmly centred upon the United Kingdom, although also found popularity in France and America. The hobby continued into the twentieth century, though appears to have more or less ceased with the First World War.

Condition: bound in contemporary mauve morocco, attractively decorated on covers and spine in gilt and blind, by Acton Griffith of Baker Street, with inner gilt dentelles, all edges gilt, head and tail of spine and joints somewhat rubbed and worn, with further light wear and bumping to extremities and corners, covers a little scratched; an appealing example.