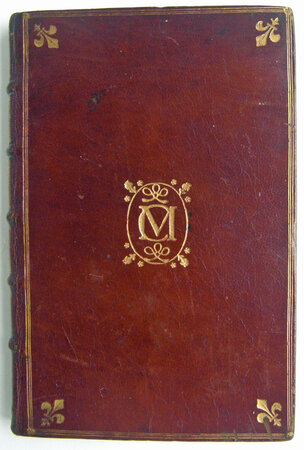 1718. 8vo, pp. [xii], 98, [2] index, [2] blank; with woodcut printer’s device on title, and woodcut head-pieces and initials; some occasional light marginal dust-soiling and minor spotting, but otherwise clean and crisp, gutters and cords exposed in a couple of places, at p. 31 and p. 64; with contemporary inscription on the title-page ‘Texier de (Fantau?)’; Rare first edition, and a fine copy bound in full red morocco, of this early and little known work proposing a new standardised system or ‘universeral loix’ based upon a decimal system, by Jean Maslot, ‘Nottaire Royal & Receveur des Hôpitaux de Troyes’. Penned some eighty years before the first practical realisation of the metric system would come into force in 1799, as Maslot’s work clearly demonstrates, the need for reform had long been recognised in a country where individual areas and regions used different and often conflicting systems and names for units, and where the length, weight, volume etc. of a unit could vary depending on the item being weighed or measured.
As Maslot notes in his preface, his initial intention had been to concentrate purely and simply upon proposing a system for currencies, weights, and measures (both surface and volume), but he had come to realise that this would be imperfect and insufficient, and thus also includes chapters relating to time, as well as to astronomical and geometrical numbers. In each chapter he explains existing units of measurement, together with its parts or fractions, before presenting his ‘simple’ system by which the measurements are ‘tous reduits sous une même dénomination de la dixiéme progression ou partition des nombres, afin qu'ils puissent être ajoûter, soustraits, multipliez et divisez, comme s'il n'y avoit que des entiers’ (p. [vii]). Maslot hopes that this new ‘universal law’ can be easily evaluated and calculated, and be used to take into account past and current systems of numbers, weights, and measures. He concludes his preface by stating that is was not his intention to pen a work of instruction in arithmetic. The rules and examples given are only to prove that ‘these universal laws, in numbers, weights and measures, can easily be executed, if it is the will of the King’. If implemented, it would create an immutable and fixed system, thus putting an end to the exiting highly impractical situation, and in so doing preserve the rights of all, put an end to prosecutions and deceptions, safe in the knowledge that there would be in place a universal system that would be good for the public, and by all could profit.
Maslot was not the first to propose a decimal system of measurement, and indeed throughout the work he frequently refers to the work of other 16th and 17th century scientists credited with having devised similar systems, notably the Flemish mathematician Simon Stevin (1548-1620), and the geometrician and Professor of Mathematics at the Royal College, Paris, Jean Boulenger (ca. 1550 - 1636). Stevin, in his work ‘De Thiende’, a twenty-nine-page booklet published in 1585, introduced decimal fractions for general purposes and showed that operations could be performed as easily with such fractions as with integers. Decimal fractions had previously found only occasional use in trigonometric tables, and although Stevin’s notation was somewhat unwieldy, his argument was convincing, and decimal fractions were soon generally adopted. At the end of the tract, Stevin went on to suggest that a decimal system should also be used for weights and measures, coinage, and divisions of the degree of arc. Boulenger is best know for his work ‘La Geometrie Pratique’ (1624) written for the use of professionals such as architects, engineers, masons, etc. The 1691 edition was edited and revised by Jacques Ozanam. Also frequently cited is a ‘M. de la Londe’, whom we believe to be a little known military engineer, who according to Janis Langins in ‘Conserving the Enlightenment: French military engineering from Vauban to the Revolution’ (p. 43) was another who can be credited with the popularization of decimals in France, through his various late 17th century works including ‘Élémens de fortification’ (1685), ‘L’Arithmétique de l’ingénieur françois’ (1688), and ‘Parallele de l’arithmétique vulgaire et d’une autre modernement inventée’ (1691).
Maslot dedicates the present work to Philippe II, Duke of Orleans, and Regent of France until Louix XV attained his majority in 1723 - no doubt hoping that he could exert some influence upon the young King in waiting to consider his proposal. The approbation is given by Jacques Ozanam (1640-1717). The copy has been beautifully bound in full red morocco, and bears the gilt monogram of ‘C. M.’ on both covers, although we been unable to establish who they may refer to. More easily identifiable is the book-plate belonging to Albert de Rochas, together with a presentation inscription to him on the verso of the front free endpaper signed by H. de Valliès. An engineering officer and administrator of the École Polytechnique, Albert de Rochas d'Aiglun (1837-1914) left numerous scholarly works, many of them on paranormal phenomena (spiritualism, magnetism, hypnosis, levitation, etc.)
A lovely copy of a little-known work. OCLC locates copies at Columbia, Lyon and the BnF only.

Condition: a lovely copy in contemporary full red morocco, spine in compartments with raised bands, attractively tooled and lettered in gilt, covers with tripled ruled gilt borders, gilt fleur-de-lis at each corner, and with central oval gilt monogram with the initials ‘C M’ (so far unidentified), with inner gilt dentelles, tooled gilt edges, all edges gilt, and attractive decorative floral endpapers embellished with gilt (though front free endpaper missing); covers slightly scuffed and stained, extremities a little bumped; from the library of Albert de Rochas in Aiglun with his bookplate on front pastedown, and with a presentation inscription on verso of front free endpaper signed H. de Valliès.