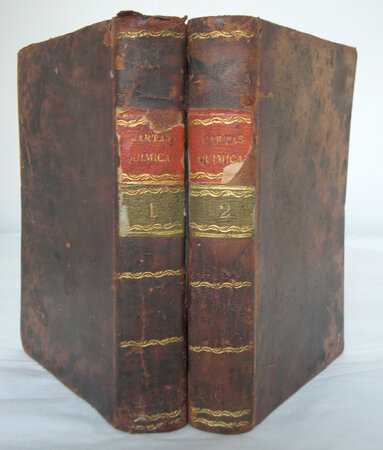 < >
‘Unknown to the usual chemical historians’ and modelled on Algarotti
[COMPAGNONI, Guiseppe].

1802. Two volumes, small 8vo; pp. xxiv, 383, [i] errata; vii, [i] blank, 370, [1] errata, [7] blank; some occasional light foxing and spotting, some minor ink staining along fore edges, but otherwise clean and crisp; First Spanish edition (first Italian 1796) of this scarce introduction to chemistry for ladies, by Guiseppe Compagnoni (1754-1833). The popularity of books such as Francesco Algarotti's ‘Newtonianismo per le dame’ spawned a genre of similar works of which the present work by Compagnoni is ‘an excellent textbook for women readers, based on the new chemistry of Lavoisier as enunciated in the Fondamenti della Scienza Fisico-Chimica of Vincenzo Dandolo. Presented in a series of 101 letters, this work covers the history of chemistry, elements and compounds, attraction, affinity, caloric, fire and light, the phlogistic versus the new chemistry, gases, combustion, acids and alkalis, salts, the old and new nomenclature, minerals etc. Pages 147-237 of Vol II entitled Lettere Aerologiche, discuses the physical and chemical properties of the atmosphere and various gases, with references to ballooning by the Montgolfier brothers’ (Neville I, p. 287). ‘Compagnoni created the last of a number of fictional women whose questions about scientific learning facilitated the popularization of new doctrines in the early modern period. His Chemistry for Ladies (1796), explicitly modelled upon Francesco Algarotti’s Newtonianism for Ladies (1737) rather than Marie Meurdrac’s Chemistry made easy for Ladies (1666), began as a series of letters between himself and Countess Marianna Rossi of Ferrara on the ideas of Lavoisier. Expressing scepticism over a woman’s desire to learn a subject as dry and difficult as chemistry, Compagnoni is reassured by the countess that she indeed wishes to be initiated into the mysteries of Lavoisier’s new language because chemistry ‘by now has become the fashionable science’ (Findlen, Translating the New Science).
Neville considers the first edition to be very rare, with Bolton’s first supplement p. 131 referring only to the second edition, and Duveen citing the present rare Spanish translation. Blake, 96; Cole 291 (first edition); Duveen 142 (this edition); Wellcome II, 379; Neville I, p. 287; OCLC: 17597388 locates only one US copy at Wisconsin, with three copies in Spain.

Condition: in contemporary mottled Spanish sheep, spines ruled in gilt with red and green lettering and numbering labels (all four lightly chipped with minor loss), with attractive decorative endpapers (though rear flyleaf of Vol I excised), head and tail of spines rubbed and lightly worn, upper cover of Vol I scratched and scuffed, with further light scratching and scuffing to covers and extremities; still an appealing copy.