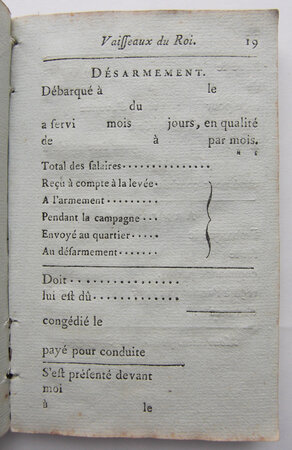 1788.]. Small 8vo, pp. 72, [14] blank; pre-printed service or record book to be completed; title-page filled in in a contemporary hand in brown ink, otherwise unused, aside from some doodling on p. 46-7, 66-7, and in pencil on p. 71-72, with the first four final blank leaves ruled in pencil to form a grid, and which has been used; contemporary stiff vellum with closing fore-edge envelope flap, retaining part of the closing cord, title in manuscript (?) in black on upper cover, with small royal arms in black at centre of rear cover, some small wormholes evident in spine, covers somewhat soiled, with small loss of vellum to envelope flap edge; a little dog-eared but an unusual survivor. A scarce survivor, a pre-printed personal service record book belonging to Jean-Bernard Bouën, born in Verdun in 1767, and who became a classified or registered ‘gens de mer’ on in 1787.
During the 17th century, several seafaring nations used forced recruitment or impressment (better known as ‘press-ganging’) to crew their Royal warships. Although the British Royal Navy continued to impress many merchant sailors well into the 19th century, in 1669-70 France created a system of maritime registration or ‘L’Institution du service des classes’, under the auspices of Louis XIV’s minister of finances Jean-Baptiste Colbert (1619-1683), thus becoming the first of the great naval powers to establish a permanent force of regular navy personnel. All men 18 years and above, who lived in or near coastal towns, and who were employed as fishermen, merchant crewmen and officers, were required to register on the rôle des gens de mer, and were divided into ‘classes’, each of which was required to serve a year in the King’s Navy every three, four or five years depending on the size of the district. This ‘inscription maritime’ was a broad, comprehensive code, which established standards of recruitment, pay, and benefits which in theory helped to build confidence and unity among newly enlisted sailors. ‘The navy maintained seamen not needed to commission warships during their year of service, theoretically, on half-pay: however, they were forbidden to sign on merchant ships. The Crown gave “classed” men various privileges in return for this perpetual commitment: exemption from certain taxes... and eligibility to receive money from the Caisse des invalides, a royal fund for invalid seamen or the families of those lost at sea.’ (Cormack, p. 23). Each coastal province was overseen by a class commissionaire, who kept a record of whether they were officers, sailors, or seafarers, together with names, age, address, qualities and description of the registrant, as well as keeping a record of any dependants. As Cormack goes on to discuss however, although this ‘class system’ was intended to place all of the maritime population at the navy’s disposal, it was constantly unable to supply crews needed for the commissioning of warships throughout the 18th century. He cites a number of possible reasons for this. Many preferred to work for privateers, whilst the mortality rate for sailors on long voyages was also high. The French navy was also frequently unable to pay its crews, and so consequently, many seamen did all that they could to resist conscription or to desert. The system was eventually reformed after the French Revolution in 1795, although some form of maritime inscription lasted until 1965.
The survival of such personal record books, by their very nature, appears to be unusual, no doubt potentially exposed to all weathers and conditions. Pierre Loti, in his work Le Matelot of 1893, includes a paragraph referring to a similar notebook: ‘Le livret de marin de mon frère Yves ressemble à tous les autres livrets de tous les autres marins. Il est recouvert d'un papier parchemin de couleur jaune, et, comme il a beaucoup voyagé sur la mer, dans différents caissons de navires, il manque absolument de fraîcheur’.
The booklet is divided into three sections. The first template page provides space for the owner to give their own details. This is followed by the ‘Instruction sur les devoirs des gens classés, leurs exemptions & privilèges’, according to recent reforms set into law on October 31st 1784. The remainder of the note book provides space to detail the owner’s various assignments, commissions on Royal vessels, and on other authorised voyages and navigation's.
For whatever reason, Bouën has filled in very little of his notebook, aside from his own personal details, and what appears to be the name of a vessel on p. 66. A number of the blank leaves at the end have been used, completed in pencil to form a grid of some sort, and which we have failed to decipher - although some look suspiciously like the doodling of a young child. Having signed up only two years before the start of the Revolution, it seems quite possible that larger events overtook him. Nevertheless, a scarce and appealing example from the last days of the Ancien Regime.