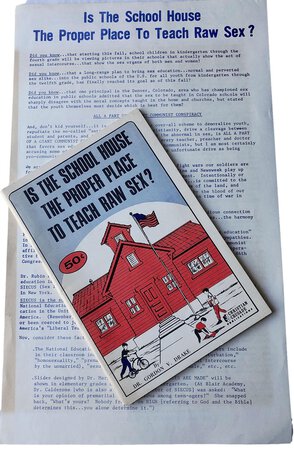 ca. 1968?.]. Offered together, 8vo pamphlet with tall broadside; 8vo, pp. 40; stapled as issued in the original printed wrappers in red and black; tall broadside, 354 x 215mm; printed in blue typescript on both sides; first side a little browned and sunned, more prominently along left margin, less prominent marginal browning on verso; good examples. Offered together, both the pamphlet and an accompanying broadsheet, of what was a controversial campaign denouncing sex education in schools as an anti-Christian Communist conspiracy. Written by Gordon V. Drake, the pamphlet was originally distributed as part of a direct mail campaign to drum up support to lobby against sex education in schools, and is considered to be one of the most widely circulated attacks on sex education in the 1960s. Apparently described by Time Magazine as ‘an angry little pamphlet’ (Time, July 25, 1969), the accompanying broadside also spares no punches. ‘And don’t kid yourself...it is a fact, that this over-all scheme to demoralize youth, repudiate the so-called ‘antiquated morals’ of Christianity, drive a cleavage between student and parents, and introduce to curious youth the abnormal in sex, is All part of a giant communist conspiracy’.
The broadside, as with the pamphlet, targets in particular the Sexuality Information and Education Council of the United States (SIECUS), and Dr. Mary Calderone, its National Director. A number of other physicians are cited, accused of being Communist sympathisers, namely Dr. Isadore Rubin of New York, and Elizabeth D. Koontz, President of the National Education Association. Schools in Anaheim, California, and in Jefferson County, Colorado, are single-out for criticism, as is Sweden - where sex education has been compulsory since 1956. ‘Today, the “venereal diseases” are running rampant through the school’.