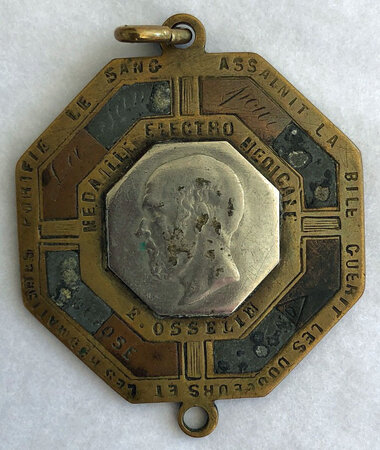 1889.]. Octagonal composite pendant made from brass, copper, lead and nickel-plated iron, 49 × 40 × 1.5mm, inscribed and with central image of Hippocrates; sold seperately and without any accompanying explanatory leaflets, and no longer retaining the original box; pendant somewhat soiled and burnished, with wear to central image of Hippocrates on one side. A scarce medical curiosity - a French galvanic brooch or pendant from the turn of the century, made from brass, copper, lead and nickel-plated iron, patented and made by E. Osselin. Different metals are known to generate small electric currents when brought together, and this was thought to confer healing properties when held against the skin and such pendants were widely marketed as electrotherapeutic devices.
The bust of Hippocrates, the father of medicine, forms the central panel of the pendant, around which the four different metals are set, and which are inscribed the words ‘Medaille Electro Medicale - purifie le sang – assainit la bile – guerit les douleurs et les reumatismes. La sante pour tout’.
The present example sadly no longer retains its original case or accompanying leaflet, though a previous example held revealed that the pendant was exhibited and available to purchase for 4 francs at the Paris Universal Exposition of 1889, and could cure a myriad of complaints, including migraine, lumbago, haemorrhoids, diabetes, cholera, sciatica, croup, liver disease, etc.
The pendant is discussed by Robert Lehmann & Raf van Laere in their article ‘Twice fooled: a metallotherapeutic and galvanotherapeutic medal analyzed’ in the Revue Belge de Numismatique et de Sigillographie in 2012 (http://www.numisbel.be/2012_M.pdf, ff. 303), who note that ‘the central part consists of an octagonal disc ... made from an unusual combination in which an iron disc was heavily coated with tin before being plated with nickel. To improve the cohesion between the tin and the outer nickel layer, the tin was first coppered, a practice still in use nowadays. The border consists of a brass (80% copper, 20% zinc) grid with inserts of copper and zinc. The pieces of zinc are protected by a thick varnish’. The article further notes that E. Osselin at the time was accused by a rival firm, Ferdinand de Boyères, of having copied his electrotherapeutic device, and so had been forced to change the type of metal used. Little further appears to be known about Osselin, other than that he produced various electro-magnetic devices, including bracelets, necklaces, belts, armbands, galvanic chains, and electro-magnetic bandages, at ‘3, rue de Maine, Asnières’ in Paris during the 1880s. According to the leaftlet he was the only authorized manufacturer of therapeutic jewelery for doctors V. Burq and Moricourt.
A similar example can be seen in the National Science Museum (http://broughttolife.sciencemuseum.org.uk/broughttolife/objects/display?id=5067).