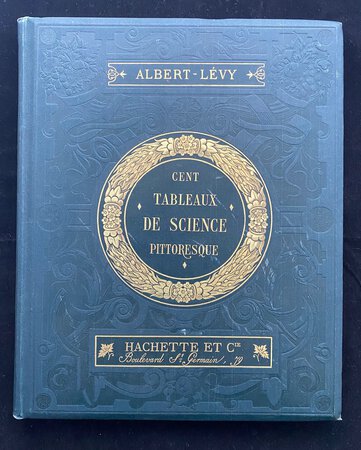 1883. 4to, pp. [iv], [204]; copiously illustrated throughout, each of the 100 chapters illustrated with one full page steel engraving facing the text, and usually a further small engraving within text page; with some occasional light foxing throughout and some faint marginal browning, but otherwise clean and bright; in the original blindstamped decorative green cloth, upper cover lettered in gilt with title within round floral wreath, boards with bevelled edges, head and tail of spine a little bumped and knocked, covers and spine with some minor spotting and scuffing, extremities a little bumped; a very good copy. First edition of this little-known and most attractively produced, late 19th century popular work of science, copiously illustrated with finely executed steel engravings.
Lévy devotes two pages to each of his chosen one hundred scientific ‘tableaux’, with a page of descriptive text to the left (often with inserted engraving), opposite a striking full-page steel engraving. Somewhat informally organised, he breaks up the volume as it were, into the twelve months of the year, devoting two pates to each month and providing the reader with an insight facts such average temperatures, hours of day-light, associated traditions, festivals, saint’s-day, together with an appealing allegorical plate.
The work includes for discussion scientific discoveries such as the diffraction of light, those of Torricelli and Archimedes, hot-air balloon flight, and the telescope. Lévy also describes the work of great scientists such as Aristotle, Galileo, Papin, Newton, Pythagoras, Euclid, Copernicus and Descartes. Rather portentously, the penultimate ‘tableaux’ addresses the question whether the end of the world is nigh - though as Lévy notes, various prognostications throughout history have so far come to nothing, and he concludes with the exhortation to ‘banish chimerical fears, leave aside these vain terrors, and let us only occupy ourselves with living well and with dignity’.
The BnF describe Albert Lévy (1844-1907) as ‘Physicien. - Directeur du service chimique à l'Observatoire de Montsouris (en 1894)’. From 1887 he ran a chemistry course at the Faculty of Science in Clermont, and later worked as a meteorologist at the Montsouris observatory and then in the Central Meteorological Office. He published a number of educational works.

Bibliography: OCLC locates only a small number of copies in the US at Alabama, the Burndy Library, the Huntington, the Smithsonian, Harvard and the British Library.