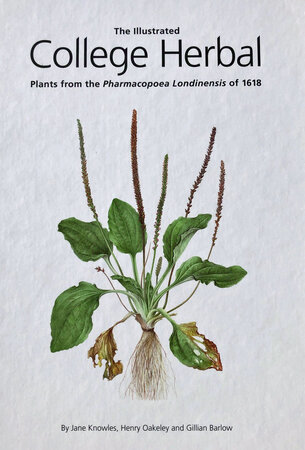 THE ILLUSTRATED COLLEGE HERBAL. Plants from the Pharmacopoea Londinensis of 1618. www.oakeleybooks. com. May

2018. Large 4to; Celebrating the 500th Anniversary of the College and the 400th Anniversary of the College’s Pharmacopoea Londinensis – the first pharmacopoeia to be manadatory for the whole country; This book contains specially commissioned paintings and drawings, and late medieval woodcuts, of nearly 200 plants growing in the Medicinal Garden of the Royal College of Physicians of London which were ingredients in the College’s Pharmacopoea Londinensis of 1618. Their contemporary uses are given from the publications of Nicholas Culpeper in 1649 and John Parkinson in 1640. The 17th century names of the 634 medicinal plants used in the Pharmacopoea have been painstakingly identified and listed with their modern botanical names – an invaluable resource for all interested in the history of plant-based medicine. The artists directory is included for all who seek commissions from them.
Hardback, 224 pages, 325 x 230mm. ISBN: 978-0-9521461-7-9.