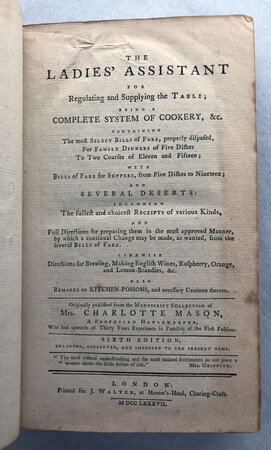 THE LADIES' ASSISTANT FOR REGULATING AND SUPPLYING THE TABLE; being a Complete System of Cookery, &c... Originally published form the Manuscript Collection of Mrs. Charlotte Mason... Sixth Edition, enlarged, corrected, and improved to the present time... London: Printed for J. Walter...

1787. 8vo, pp. [xx], 484, [20] index and final verso publisher’s advertisement; a number of small paper flaws and marginal tears, notably at T8, Aa5, Aa8, Bb4, Ff8 (with loss of outer corner just touching text), and Bb6; somewhat foxed throughout, with quite prominent staining affecting upper margins sporadically throughout; in recent quarter calf over marbled boards with new endpapers, spine in compartments with raised bands, ruled in gilt with green morocco label. Later edition of this popular work, first published in 1773. Charlotte Mason was ‘a professional housekeeper, who had upwards of thirty years experience in families of the first fashion’. According to the preface for the first edition which is reprinted here, the book was the first ‘that contained any instructions for Regulating a Table’, and the present sixth edition includes a further encyclopaedic 117 pages of bills of fare.
The recipes are designed ‘for a servant... that... if she has a common genius and a good palate, she may be made capable of any cook’s place’. They include, for example, how to prepare a Pig Matelote: ‘Having gutted and scalded your pig, cut off the head and pettitoes, and cut your pig into four quarters; put them with the head and toes into cold water...’. A. W. Oxford remarks that The Ladies Assistant ‘seems an excellent and well-prepared book, but few people would care for Viper-Broth’. It does, however, include one of the earliest curry recipes calling for 'curree powder', and also one of the first descriptions on how to make a sandwich. The first edition of the work was favourably reviewed in both The Critical Review and The Monthly Review in 1775, and the revised second edition, to which Mrs. Mason affixed her name, was also mentioned, with The Critical Review saying that it was "considerably enlarged and forms a very complete system of cookery."
Most editions of The Lady's Assistant are uncommon, and form a valuable source-book for later 18th century English recipes.