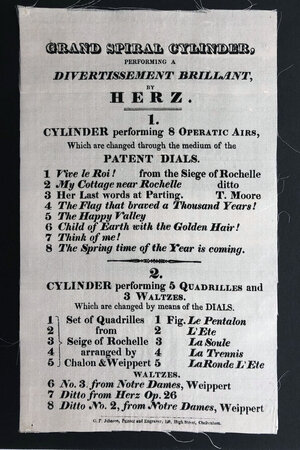 [ca. 1840-45]. Single sheet, 23 cm x 13 cm, printed on silk on one side; some very minor fraying to edges, and very slightly darkened, but otherwise in fine condition. A celebrated pianist, composer and inventor, Henri Herz (1803-1888), Austrian by birth but French by nationality and domicile, travelled world-wide, including tours in Europe, Russia, Mexico, South America, and the United States. In 1839 he founded his own piano factory where he made many important developments in piano design.
This luxuriously produced announcement, printed on silk, seems to be for a performance by some sort of mechanical musical instrument, using cylinders which were "changed through the medium of the patent dials." According to the flier, the two cylinders were capable of performing "8 operatic airs," and "5 quadrilles and 3 waltzes." We have so far been able to identify the machine in question, although Herz made improvements, and patented designs for various sostenente (or sostinente) pianos - the name given to keyboard instruments on which the duration of sounds is artificially lengthened by methods such as compressed air, the quick striking of hammers, free sounding reeds, or by other clockwork or mechanical devices. The first known example was invented by Henry Robert Mott of Brighton in 1817. Herz worked upon sostenente piano mechanisms using both compressed air (obtained by means of bellows moved by pedals or a motor and which is directed upon already vibrating strings in order to prolong the vibration), notably his ‘pianoeolique’, as well as a ‘melopiano’, a method of sustaining tones through the repeated and quick striking of hammers. Fast rotating cylinders were one way of achieving this.
This appealing silk promotional flier has been printed by the artist and engraver George Phillips Johnson (1807?-1848).