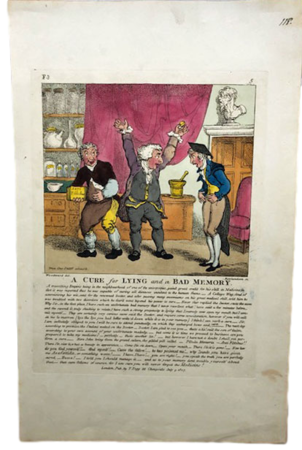 < >
A deceiver deceived - attacking both students and quacks
ROWLANDSON, Thomas.

1807. Hand-coloured etched broadside with engraved text, sheet size 404 x 260mm; plate mark 280 x 215mm; image with 20 lines of lettering below including title and imprint; with the number ‘118’ in manuscript in upper right corner; some light browning and soiling; an appealing example. Striking hand-coloured etching by Thomas Rowlandson (1757-1827), after a drawing by his friend and drinking companion, George Moutard Woodward (1795-1809), depicting an itinerant doctor, who by a subterfuge, cures an undergraduate hoaxer of his supposed maladies of lying and bad memory.
The etched image shows ‘the interior of an apothecary's room: jars on shelves; a counter with drawers, pestle and mortar, &c. A bust of Galen stands on the lintel of the door (r.). An alarmed undergraduate in cap and gown stands clasping his stomach. The doctor faces him triumphantly, with raised arms and holding a pill-box. His man, who wears an apron, walks off with a large box inscribed 'Anti-Fibbibus'. The (prose) inscription below the title relates that a 'College Wag' called on a 'travelling Empiric' and asked to be cured of a bad memory, and a habit of lying. He is cured by the 'gilded pill called - Pillula Memoria - Anti Fibbibus!!' The youth complains that he is poisoned with Asafœtida, the doctor answers that he speaks the truth and will never forget the medicine, so is cured’ (British Museum online).
Along with Hogarth, Gillray and Cruikshank, Thomas Rowlandson is at the uppermost peak of English satirical art. Amongst these masters, however, Rowlandson was the most gifted artist and his compositions always seemed the closest to the truth for he often lived the dissipated style of life he so memorably satirized. After studying in both Paris and London, Rowlandson began his career as a portrait painter. By 1782, however, he devoted himself almost exclusively to his first love; caricature and satirical art. After receiving a large inheritance, Thomas Rowlandson quickly gambled it away. After losing his fortune at a thirty-six hour card game he is known to have exclaimed, "I've played the fool, but (holding up his pencils) here is my resource." Working with such British publishers as Flores and Thomas Tegg, Thomas Rowlandson designed many memorable satires. Indeed this is one of a number of prints by Rowlandson published by Tegg in 1807 which are numbered in either top corner with a capital letter followed by a number, and occasionally another number in the opposite corner, each sheet with an illustration above either a song or prose text.
Rowlandson’s is best remembered however, for his collaboration with the famous London publisher, Rudolph Ackermann, to produce some of the finest satirical series in the history of art. These included The Microcosm of London (1808), the Tour of Dr. Syntax in Search of the Picturesque (1812) and The English Dance of Death, published in two volumes in 1815 and 1816.