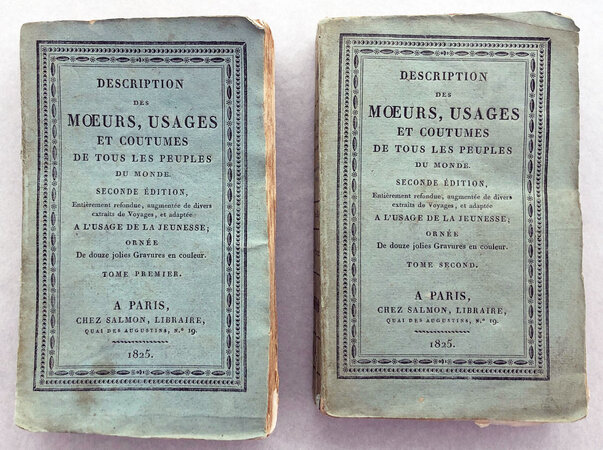 1825. Two volumes, 12mo; pp. vi, 248, with five hand-coloured engraved plates; pp. 250 (though 248 as no pp. 156-7 through pagination error), with seven uncoloured engraved plates; some light foxing and spotting throughout, with some occasional marginal tears, lower corner of p. 141 in Vol. I torn with loss; in the original green printed paper wrappers, with waste-paper pastedowns, head and tail of both spines lightly worn with slight loss, upper joint of Vol. 1 split and a little fragile but holding, with further light cracking to spine, some light spotting and soiling to covers, extremities a little dog-eared, but overall an appealing, unsophisticated copy. Second expanded edition (first 1821) in the original printed wrappers, of this attractively illustrated work for young children, introducing them to the manners, customs, wonders, and curiosities of the nations of the world - an uncommon contribution to what was an extremely popular genre at the beginning of the 19th century, which saw many such elementary illustrated works introducing readers to the geographical world.
Very much of its time, the racial stereotyping and fascination with foreign civilisations makes for somewhat uncomfortable reading today, but nevertheless highlights early 19th European perceptions of the world. Tome I deals with Europe and the Far East, and includes five hand-coloured plates. Tome II, in this instance uncoloured, points the reader towards Asia, Africa, and with a detailed section on North and South America, and including depictions’ of Native Americans, Native Canadians, and Native Californians.
The work first appeared in 1821, and according to the copy at the BnF was ascribed on the title-page ‘Par P.C.’ - though they give no suggestion as to the author’s identity. Of interest, the imprint for the 1821 edition was ‘Chez Lécrivain’. No initials are given in this second, revised edition, here published by Salmon. The BnF also hold another variant copy, undated and with the publisher imprint of Roret, but bearing the same collation.