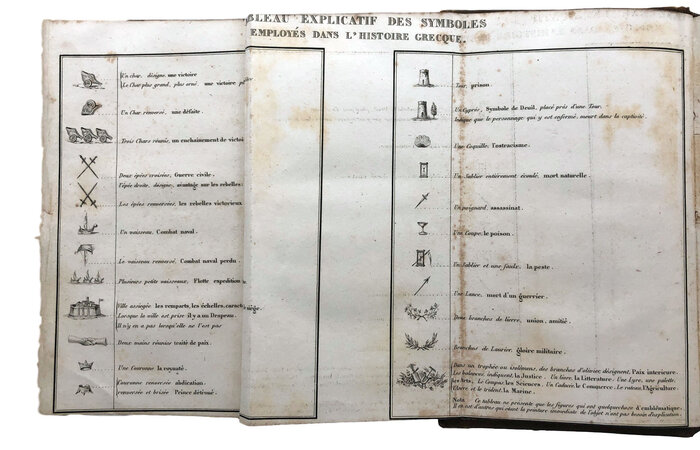 1837. 12mo, pp. 264; with 26 finely engraved plates (including 3 folding plates and one folding letterpress table, and one double-page table printed vertically within text); some light marginal foxing and browning throughout, with some occasional ink markings; first folding engraved ‘key’ table cropped close at head and tail and a little creased, two small nicks at tail of the folding map, touching image border but with no loss and fore-edge protuding slightly and a little furled; with old binder’s label at tail of front pastedown; in contemporary calf, spine lettered and decorated in gilt, spine slightly sunned, covers slightly scratched, extremities lightly rubbed and worn; an appealing copy. Scarce first edition of this attractive mnemonical treatise by the noted educationalist and author of several historical works, Mme Laure Boen de Saint-Ouen (1799-1838), in this instance providing a new and effective method of teaching ancient history.
Saint-Ouen had first employed her eye-catching pictorial system in 1822 in her ‘Tableaux mnémoniques de l’histoire de France’, using small emblems designed to represent significant events: for example a small upright chariot or ship signified a victory in battle, whilst an upside down equivalent depicted a loss. A sword represented an assassination, in contrast to an hour-glass signifying a natural death. Such was the success and positive reception to her 1822 work and this new and effective method of teaching history, that Saint-Ouen published a number of similar works, notably an extensive history of England (1825), as well as a history celebrating the life of Napoleon (1833).
In the present work, the first plate provides the key, with the second presenting the reader with a map of antiquity, together with a folding table providing a comparative chronology. The attractive plates that follow each include a medallion portrait of a significant personage from ancient history, together with an accompanying ‘mnemonic medallion’ comprising a combination of emblems symbolizing the events of their life. Throughout the work, Mme Saint-Ouen poses a number of exercises and questions to test the student.
Her novel method was described by contemporary reviewers as being ‘well-conceived and well executed’ and did much to revolutionise the way that history was taught in French elementary schools. Her initial plans to publish a series of European histories to include studies of Germany, Russia, and Spain, were curtailed by her untimely death.