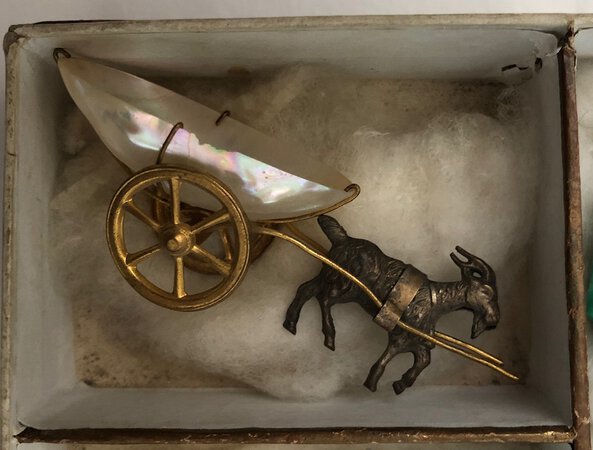 < >
A scarce and most appealing survivor of a late 19th century parlour game
[GAMES AND AMUSEMENTS.]

1860.]. Large decorative card box with hinged lid, 345 x 445 x 65mm, interior compartmentalised, with large central box with gilt paper surround housing a wooden roulette wheel, decorated in red and blue and numbered 1 to 24, surrounded by 24 smaller rectangular boxes, each lined with cotton wool, and each containing a small ornate ‘prize’ objects of made from various substances, including wood, glass, ceramic, metal, bone, mother-of-pearl, and lace, and with original silk pouch retaining the metal roulette ball, and 24 red presumably bone tokens, each numbered (number 1 seemingly a later replacement of metal); roulette wheel a little faded, all of the ‘prizes’ delicate and fragile, with a number showing signs of wear, with some occasional loss and two broken, but all present; A wonderful and no doubt extremely rare survivor, especially complete as here, of this family parlour game of ‘Tombola’, dating from the mid to late 19th century.
Originating in Italy in the 18th century, the game of ‘Tombola’ was traditionally a board game similar to bingo. Here the board has been replaced by a central roulette wheel, numbered 1 to 24. Presumably a family member would be elected as ‘croupier’, with players either drawing from the bag, or being dealt, one or more of the red numbered tokens, depending upon the number of players. The ball would then be thrown onto the spinning wheel, with the owner of the corresponding number receiving a prize. Whether this was first-come-first serve, or whether the prizes were themselves numbered, is not clear. The twenty-four small objects, however, have all been intricately made and are most charming, even though some are showing understandable signs of wear. Prizes include two wooden boxed sets of dominoes, a small worked metal box, a pocket magnifying glass inlaid with mother-of-pearl (though missing to edging pieces), an embroidered doily, a ceramic candle holder in the shape of a leaf, a pair of cufflinks, a pair of turquoise earrings (again showing signs of wear), two sets of bone skittles, a faux tortoise-shell box containing a ring, two painted ceramic boxes, two small glass candleholders with fake candles (both of which have broken off), a miniature mother-of-pearl penknife, and a delightful trinket in the shape of a metal goat pulling a mother-of-pearl shell carriage. A delightful ‘box of delights’, transporting us back to halcyon days of family games evening - and perfect for the new lock down world.
We have so far been unable to find any similar surviving examples, and can find no further information about either the lithographer Marie, nor the artist, M. A. Mourgue. The publisher Coqueret was active from about 1846 and produced a variety of games, including a number of lotto games, until about 1875, when he was succeeded by Charles Watilliaux.

Condition: in the original decorative box with hinged lid, retaining original silk hinge support though now detached, with mounted seemingly hand-coloured lithograph on upper lid, after a drawing by M.-A. Mourgue, with title in a central banner sitting on the shoulders of a young man and a young girl, with two further vignettes showing a funfair, and a parlour scene with family playing ‘tombola’, all within a garland of flowers, shells and minerals; outer edge of lid with intricately cut silhouette border, all edges decorative gilt embossed paper, upper cover somewhat browned and soiled with some minor abrasions, with some loss of paper in a number of places, extremities rubbed and lightly worn; nevertheless, a most appealing example.