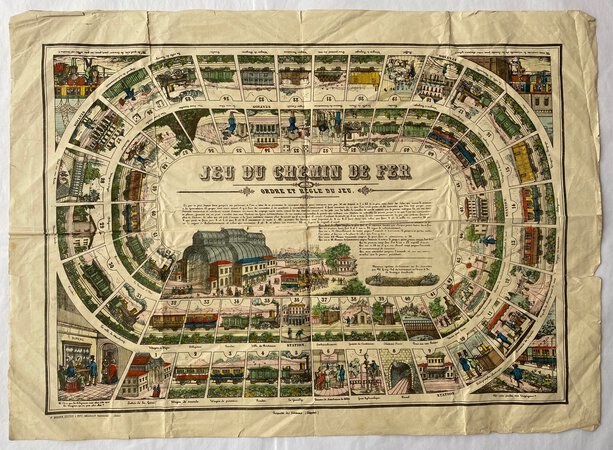 1870s. Large single sheet lithograph, somewhat crudely hand-coloured, sheet size 546 x 758 mm, image size 475 x 670mm; image within double-ruled black border, with central printed instructions; sheet has been folded into eight, leading to some general creasing and light wear along folds, three small wormholes, a number of small tears along main horizontal fold, some larger marginal nicks and tears, one along the right hand margin spanning about 7cms and touching the image though with no significant loss, some overall light foxing and soiling, but nevertheless an appealing and bright example. An appealing late 19th century adaptation of the ever popular ‘game of goose’, here focusing upon European ‘railway mania’. As usual, the present game is comprised of 63 spaces, in a helical arrangement, with the central panel containing the rules. Based upon a train journey, every ninth square lands upon a station, with the other squares depicting locomotives (including the City of Strasbourg, City of Bordeaux, City of Marseille, and the Joan of Arc), wagons and tenders, points of interest along the route (including a water tower, a hydraulic pump, the guard tower), signalmen, railway points and interchanges, and a railway turntable. We see passengers buying tickets, and dining in the buffet car. Along the route, the traveller will pass through cuttings and over bridges, although the journey is not without incidence. Woe betide the player who lands on square 58 – the scene of a terrible and gory accident – an all too graphic reminder of the gruesome consequences of being run over by a locomotive.
According to a small note at the end of the central panel, the present example is based upon an idea by ‘M. Henry, Chef du mouvement au Chemin de Fer de Nancy à Sarrbruch [sic’.
Adrian Seville, in his Grolier Club exhibition of 2016 ‘The Royal Game of the Goose. 400 years of printed board games, notes a slightly earlier example issued by P. Didion, ‘Jeu des contes des fées’ (Game of Fairy Tales, exhibit 19), and which he included as being an example of provincial French production. He dates it originally to around 1860, but having been later reprinted.
‘The Game of the Goose (in French, the Jeu de l’oie) is one of the oldest known printed board games; early records of its existence in Italy date as far back as the late fifteenth century, and it appears in England as early as 1597. Like so many things, the jeu de l’oie can be played at multiple levels: children can play it to win, caring little for the journey which, like so many games of chance, requires no particular skill or talent. But, on another level, scholars mine the game for its cultural evidence, elements of social behaviour and historical cues’ (exhibition preface).
The University of Michigan appear to hold the same game, possibly an earlier variant, and which they date to 1850