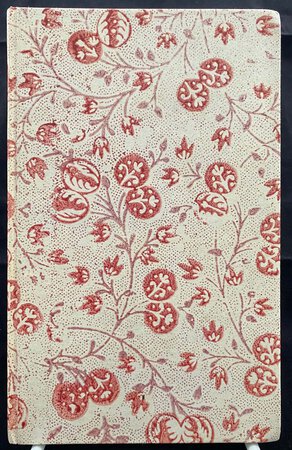 1760. 8vo, pp. [viii], xvi, 93, [1] blank; with attractive woodcut head- and tail-pieces; title-page a little dust-soiled, with some light foxing and browning, but overall clean and crisp; in modern decorative paper boards, an appealing copy. First Danish edition, most attractively printed, of this important and influential work on the safe transport of natural history specimens by sea, by the French botanist and polymath Henri-Louis Duhamel du Monceau (1700-1782), first published in 1752 as ‘Avis pour le transport par mer des arbres, des plantes vivaces, des semences et de diverses autres curiosités d’histoire naturelle’. The present translation has been taken from the second edition of 1753. It was further translated into German in 1756, and in 1758 was appended to a larger text on the collection and transportation of quadrupeds, birds, fish, shells, and other naturalia, by Étienne-François Turgot (1721-1789) ‘Mémoire instructif sur la manière de rassembler, de préparer, de conserver et d’envoyer les diverses curiosités d’histoire naturelle’ (see item below).
The study of the natural sciences during the 18th century relied upon the observations made, and collections gathered by, individuals - be they merchants, explorers, or scientists, as they travelled throughout the Atlantic world and beyond. The transportation and circulation of botanical and zoological specimens, however, was a hazardous affair, with existing methods of preserving the plants, fish, birds, and land animals - the vital raw materials for European scientific study - often insufficient for the long voyages that brought them from around the globe. Specimens arrived dead when they were needed alive, rotten and damaged when they were needed whole, and they frequently suffered through either the neglect of uninterested sailors, or fell victim to rats and other shipboard pests. Whilst methods of financing and securing berths for transportation may have differed between nations, the physical dangers of the shipboard environment transcended imperial boundaries. Reflecting the universalising tendencies of Enlightenment science, naturalists of all nationalities strove to produce and procure fungible specimens, to help enable comparative study and research, and so became increasingly focused on how best to surmount the difficulties of transportation. Through the shared correspondence of experiences, they came to develop some common material practices that could protect specimens during weeks at sea - a knowledge acquired through hard experience and frequent loss. They came to better understand that the ships were ecosystems onto themselves, complete with predators, micro-climates, and symbiotic relationships, all of which needed to be better understood. It led too, to a greater appreciation of the need to preserve as much of the native ecology as possible, particularly of plants, through the recreation of growing conditions, preserving organic matter, and thus help to maintain the specimens’ natural equilibrium.
The result of shared correspondence and personal experience, as well as collaboration with Roland-Michel Barrin de La Galissoniere (1693-1756), governor of New France between 1747-1749, and with whom Duhamel had worked to help establish the Académie de Marine in 1741, the present treatise became an influential guide as to the best practices and precautions to be taken to ensure the safe transportation of trees, herbs and plants in particular. For example the avoidance of pots and glass containers is advised, with wooden boxes, barrels, and baskets suggested as more durable alternatives. To protect delicate seeds, Duhamel recommends keeping them whole, and storing them in closed, dry cases, surrounded by earth that is almost dried and well mixed. He notes that some seeds stored in this way have germinated during the voyage, and have then been successfully replanted. The retention of some of the original organic matter around the roots of plants is also advised, and that they should be watered during transport. Where-ever possible, naturalists should seek to avoid lodging their specimens with the sailors, (rumoured to sometimes resorting to drink the preserving spirits), but rather entrust them to the care of passengers, ship surgeons, or most preferably, within the captain’s personal cabin - deemed to be the choicest position onboard ship. Live trees should be placed, as much as possible, in the open air and at the top of the vessel away from contamination by sloshing sea water, but that in storms, extreme temperature changes, or pre-longed spells of rain, that they should be taken inside or covered.
Together with other naturalists, such as Turgot and Nicolas (see below), the present work therefore did much to help improve the safe transportation and circulation of vital material objects, which made possible intellectual and scientific advances. As Parsons and Murphy argue, the environmental science of ships gained in importance, and ‘therefore ships, as much as gardens, museums, and cabinets of curiosity, constituted a space of natural history’ (p. 537).

Bibliography: For a discussion of the work see Christopher M. Parsons and Kathleen S. Murphy, Ecosystems under Sail, Specimen Transport in the Eighteenth-Century French and British Atlantics, Early American Studies, 2012.