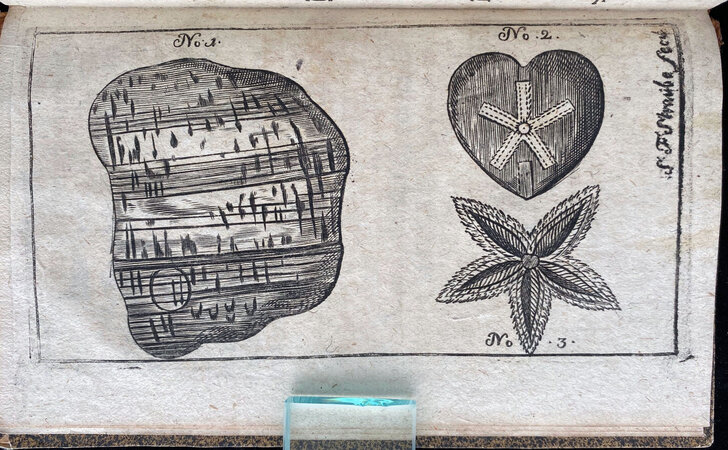 < >
The ‘Musical Stone’ which led to ridicule
SIVERS, Heinrich Jacob.

1734. Six parts in one volume, 8vo; pp. [ii] engraved frontispiece portrait, [iv] general title-page and dedication, [iv] engraved plate and separate title, [5] - 16, [iv] engraved plate and separate title, [21] - 32, [iv] engraved plate and separate title, [37] - 64, [iv] engraved plate and separate title, [69] - 80, [iv] engraved plate and separate title, 85 - 96, [iv] engraved plate and separate title, [101] - 110, [2] index; in all six engraved plates; with woodcut initials, and head- and tail-pieces; some occasional light foxing and browning throughout, but otherwise good; in contemporary sheep backed sprinkled boards, spine ruled in black, head of spine chipped with some loss, with both joints somewhat cracked and worn, but holding firm, covers a little cockled and bumped, extremities lightly bumped, nevertheless an appealing copy. Rare first collected edition of this series of six natural history ‘specimens’ published between 1732 and 1734, by the German theologian, poet, and natural historian Heinrich Jakob Sivers (1708-1758), discussing in particular a number of recent fossil discoveries and notably his discovery of a stone, seemingly marked with musical notation, and which he discovered whilst walking along a beach near Niendorp on the Baltic coast.
Having studied theology at Rostock University, Sivers returned to his birthplace of Lübeck in 1731 where he was accepted as a candidate for the ministry. Having already made a name for himself as a poet in Rostock, Sivers was a keen natural scientist, and shortly after his arrival back in Lübeck he published a short treatise, Descriptio lapidis musicalis, echinitae cordati et stellinae marinae’ discussing his recent discovery of a rare fossil, or ‘musical stone’. The work was dedicated to the Prussian Academy of Sciences, and whilst perhaps sounding somewhat far fetched as a theory, was nevertheless well received, Sivers in fact being awarded membership of the Academy as a result, which prompted him to publish a series of further ‘Specimina curiosorum Niendorpensium’ in quick succession, providing descriptions of lapides stellares, belemnitae, and succina. Two further short essays were published in 1734, and all six have been collected together here under a general title-page, and although paginated continuously, each retain their own separate title-pages. The famous ‘musical stone’ is illustrated in the first of six, rather crudely executed and engraved plates, by S. F. Straube, with an engraved portrait of the author included as a frontispiece.
Whilst the Academy were supportive of his efforts, Sivers’ description of his ‘musical stone’ caught the barbed attention of fellow satirical poet, Christian Ludwig Liscow (1701-1760), however, who had already taken swipe at him for both an earlier theological work, as well as pervious attempts at satirical poetry. Liscow penned ‘Vitrea Fracta’ in 1732, ostensibly a translation of a letter from one Sir Robert Clifton to a correspondent on the Russian island of Novaya Zemlya regarding an apocalyptic image he has seen in a frozen window pane, but in reality a determined swipe at Sivers, thinly disguised as ‘Mr Makewind’, who maintains a ‘cabinet of rarities’, and is ridiculed for being accepted into the Academy of Sciences. The two became embroiled in a bitter dispute, and Sivers eventually left Lübeck in 1734, for Denmark, before moving to Sweden, where he continued to pen satirical verse, and other contributions to natural science, including a work on Swedish marble.
Whilst his dispute with Liscow seems to rather dominate German biographies of Sivers, and colour their opinion of him as something of a figure of ridicule, he was clearly held in high regard within Sweden where he was respected as a polymath and noted writer, and long time correspondent with Linnaeus. Indeed the Swedish sources make no mention of Liscow. His significance as a natural history collector seems to have been recognised later, with Aikin’s 1814 ‘General Biography’ noting that during 1734 ‘he made a tour to Denmark and Sweden, in order to collect objects for a museum of natural history which he had begun to form... Sivers was a man of considerable learning, and had a library, consisting of two thousand volumes, chiefly on theological and historical subjects. He possessed also a numerous collection of antiquities, natural productions, and various curiosities of art; but in 1737 had been obliged to sell to Count Charles Gyllenborg the half of his minerals, and a pretty large cabinet of Roman coins, which the Count afterwards bequeathed to the academy of Lund’ (vol IX, p. 161).