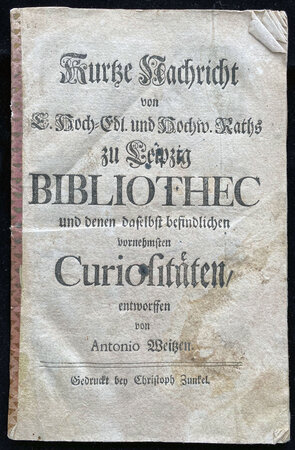 1722.]. 8vo, pp. [31], [1] blank; with woodcut head-piece and initial; somewhat browned and lightly stained throughout, notably along lower margins and to final blank, final leaf torn at lower gutter, upper inner gutter of final three leaves wormed, with loss of a couple of letters; with marbled paper back strip, corners a little furled. Scarce issue of this guide to the treasures and curiosities of the Leipzig Senate library, the ‘Bibliotheca Senatus Lipsiensis’, by Anton Weitz (fl. 1682-1751), the custodian of the library for many years. Established in 1683, as a result of a bequest of some 2000 books made by the lawyer and scholar Huldericus Grossius (1605-1677), the library gained its reputation as much for the art work and other curiosities housed within it, as for the library itself, which by this time had substantially increased its holdings to over 25000 volumes. Weitz provides a virtual tour, guiding the reader ‘up the stairs’ to the first door, on either side of which can be seen two paintings depicting scenes from Ancient history. After giving a brief history of the libraries formation, Weitz moves through the various rooms, highlighting in turn the numerous paintings (the majority of which again depict scenes from ancient history and mythology), together with some 115 portraits of the great and good which adorn the walls.
Within the front hall could be found several cabinets housing curiosities including minerals, fossils, petrified objects, ‘exotica’, as well as mathematical instruments. Within the library itself were further cabinets containing antiquities, urns, as well as a substantial collection of notable coins and medallions, antique gems, and other scientific instruments. A pair of Blaeu globes also grace the library. Special attention, however, is given to a description of an Egyptian Mummy, one of the prize exhibits within the collection.
Above the door of the library itself, hangs an inscribed plaque in honour of Grossius. Containing many wonderful operas and collections, neatly classified according to academic disciplines and then subject matter, the library was noted in particular for its collection of foreign language bibles, scarce oriental language works, as well as many botanicals, notably a Hortus Eystettensis. Readers could also access a number of ancient manuscripts, in both Hebrew, Arabic, and Greek. The library was available for use by scholars and citizens on Wednesday and Saturday, having requested the books in advance in writing.
A short history of the library had previously been published by the then librarian, Gottfried Christian Goetz, in 1711 ‘Bibliothecam magnifici amplissimique Senatus Lipsiensis’. The present work seems to have first been published in around 1720, the date of 1722 for the present issue being derived from a paragraph on the penultimate page. Erlangen have an issue of pp. [20] with an imprint of ‘Leipzig, Druckts Johann Heinrich Richter’, and which they date to 1720 (VD18 12227587). There exists a shorter variant of pp. [24] seemingly of 1722, also printed by Zunkel, but with a differing imprint and reset using smaller font and differing head- and tail pieces (VD18 11270128). The present issue is held by Sachsen-Anhalt (VD18 90481348). It appears to have then been printed by Tietze in 1725, again with slight variants (see VD18 10214658 and VD18 13064274). All issues are scarce.