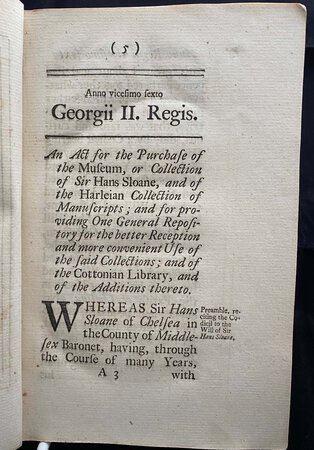 ANNO REGNI GEORGII II. REGIS... VICESIMO SEXTO. At the Parliament begun and holden at Westminster, the tenth day of November, Anno Dom. 1747, in the Twenty first year of the reign of our Sovereign Lord George the Second, by the Grace of God, of Great Britain, France, and Ireland, King, Defender of the Faith, &c. and from thence continued several prorogations to the eleventh day of January, 1753, being the sixth session of this present Parliament. London: Printed by Thomas Baskett, Printer to the King’s most Excellent Majesty: and by the Assigns of Robert Baskett, 1754. [with abridgement:] [DROP-HEAD TITLE:] Anno vicesimo septimo Georgii II. regis. An act for making perpetual several laws for punishment of persons destroying turnpikes, locks, or other works erected by authority of parliament;... and to impower a certain number of the Trustees of the British Museum to do certain acts... [n.p. but London, n.p. n.d. but

1754.]. 8vo, pp. [ii], 5-138, with engraved title-page vignette; pp. 7, [1]; aside from some light spotting and foxing, clean and bright; abridgement loosely inserted, with some dust-soiling and light wear along fore-edge; in later stiff marbled wrappers, spine somewhat nicked and worn with small loss at head and approximately 2cm loss at tail, covers slightly creased with some light surface wear and minor staining. Separate edition, issued with a general title the year after it had received Royal Assent, of the act which saw the inception of the British Museum, the ‘Act for the purchase of the Museum, or collection of Sir Hans Sloane, and of the Harleian collection of manuscripts; and for providing one general repository for the better reception and more convenient use of the said collections; and of the Cottonian Library, and of the additions thereto’ (p. 5 and known formerly as Public General Act 1753 26. Geo. II. c.22).
Sir Hans Sloane died on January 11th 1753, aged 83, leaving behind a magnificent collection consisting of around 71000 objects, including 50,000 printed books and manuscripts, natural history specimens including 337 volumes of dried plants, coins and medals, prints and drawings, and antiquities, acquired from around the globe. Like many of the great collections and cabinets of curiosities of the time, Sloane had used developing global networks created by European imperial expansion to collect these materials, some of his income partly derived from Jamaican sugar plantations and enslaved labour. His will had placed the collection in the care of several trustees who were entrusted to ensure that his wishes that it be bequeathed to the nation were achieved. They were instructed to approach king or parliament with an offer for the collection in return for the payment of £20,000 - not the full value of the collection which was nearer 80,000 - to be paid to his executors for his daughters. Further, it was his wish that they secure an act of Parliament to vest the collection in their care, with all necessary property, powers, and money to ensure its preservation and accessibility by creating a new and freely accessible public museum to house it. So confident was Sloane over the collection’s scientific and educational value, that should this offer be declined it was to be offered in turn to four academies - St. Petersburg, Paris, Berlin, and Madrid - where Sloane held honorary memberships. Should this fail, the collection was not to revert to the daughters, but rather was to be sold at auction, with his heirs receiving the cash.
As chair of the executors, the Earl of Macclesfield presented a petition to King George II to purchase the legacy, but being famously uninterested in championing either the arts or sciences, he dismissed it as being too expensive. This rebuff led the executors to approached parliament, and whilst some did not fully embrace the idea of purchasing a museum, others, notably Henry Pelham, recognised that such a valuable bequest should not slip through its hands. After deliberation, parliament took the opportunity to combine Sloane’s museum with the great Cottonian and Harleian libraries, to create a larger institution than originally envisaged. The Act set in place the rules of governance for the museum, with a new body of forty-two Trustees appointed, and which included holders from some of the greatest offices in church and state. The Act was passed and given Royal Assent on June 7th 1753, the collections thus becoming the foundation not only of the British Museum, but subsequently of the Natural History Museum and the British Library.
The King having refused to pay the £20,000, the Act provided for the establishment of a national lottery to raise £300,000 to build the museum. It proved to be a scandalously run affair, with virtually all of the tickets sold before they were put on offer to the public. The market was covered especially by a rich financier, Sampson Gideon, and also by one of the four receivers of the lottery money, Peter Leherpe. They managed to sell the tickets in large chunks before the lottery opened. The Act had specified that no one person should have more than 20 tickets. Leherpe, however, allowed people to submit a list of fictitious names so that they could buy many more. After two days, the British Museum lottery tickets were said to be selling for a premium of 16 shillings, with various financiers reselling them at a profit. Gideon himself had more than 5,000 tickets. When he died he left an estate worth more than half a million pounds, and during his lifetime was so rich that he bankrolled the Government. The identity of the eventual lottery winner is not known, but the winning ticket number was 46885. The British Museum, after the payment of expenses, received £95,194 8s 2d, some of which went towards buying Montague House, the house on the present site into which the various collections were sent. It was eventually opened as a museum on January 15th 1759.