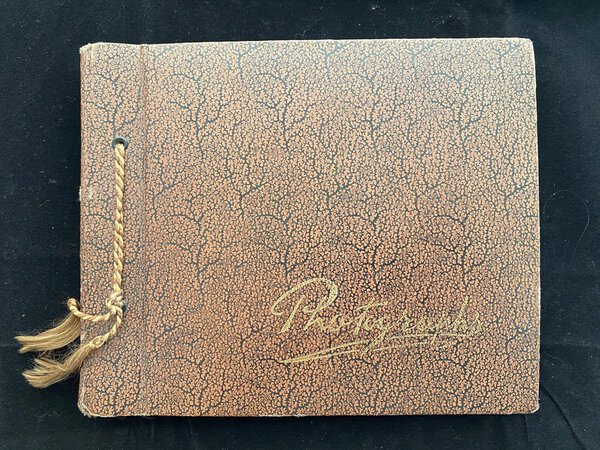 SMALL OBLONG ALBUM CONTAINING OVER 70 PHOTOGRAPHS OF UK AND EUROPEAN OBSERVATORIES, VARIOUS TELESCOPES, AND OBSERVATIONS OF THE SOLAR SYSTEM, apparently assembled by the astronomer, and Fellow of the Royal Astronomical Society, Frank J. Acfield (1905-1975), various places, and ca. 1947-ca. 1953, with a small selection of later newspaper clippings loosely inserted.

ca. 1947. Small photograph album, 175 x 210mm, sheet size 166 x 180mm; ff. 15 leaves of brown card, containing 73 photographs of varying sizes, most presumably taken by the compiler, one larger and more formal photograph embossed with the stamp ‘Forest Hall Observatory, Northumberland’, and with four later newspaper clippings loosely inserted at rear; with evidence of at least two further images no longer present; the majority neatly annotated in a single hand in ink; some occasional light scuffing to the card, fore-edge of a few leaves a little thumbed and rubbed; contemporary ‘faux crocodile’ brown stiff card photograph album, lettered in gilt on upper cover, bound with gold and red silk cord through eyelet's, head and tail of spine a little rubbed and worn, corners lightly bumped; good. A striking personally compiled photograph album from the mid 20th century, assembled by the noted local astronomer and Fellow of the Royal Astronomical Society, Frank J. Acfield (1905-1975). A large striking photograph is found on the verso of f. 4, and annotated ‘Circumpolar Star Trails by F. J. Acfield, Forest Hall Observatory’, whilst another photograph is annotated ‘F.J.A’ and shows him standing by his own telescope. A previous owner has also had the handwriting verified, by the archivist of the British Astronomical Society, as being that of Acfield.
The 73 photographs of varying sizes were taken during the late 1940s and early 1950s, and depict a number of UK and European Observatories and buildings, their astronomers (including one of Acfield himself at work), 26 images of telescopes, and 25 depicting various observations of the solar system, including images of the sun, the moon, Jupiter, ‘Comet Honda’, and auroral light. Amongst the observatories visited include Seaton, Hepple, the Royal Observatory Edinburgh, Paris, Whickham, with a number taken of, and from, Acfield’s own observatory at Forest Hall in Newcastle, which he set up at his home in 1949. Using a 10-inch reflecting telescope, Acfield undertook extensive celestial photography, and according to Harold Gooch in his ‘Appreciation’ of Acfield in the Journal of the British Astronomical Association (Vol 89, p. 504-505, 1979) ‘did much for the Jupiter Section of the BAA and also worked extensively in the fields of cometary and auroral work as well as in the patient pursuit of the minor planets. Much of his outstanding photographic work is still widely reproduced’ (Gooch, p. 504). In addition he was a tireless astronomy populariser, writing weekly newspaper columns, and giving regular lectures. In 1970 an episode of the famous ‘Sky at Night’ series, hosted by Patrick Moore, was transmitted from Forest Hall, with the programme dedicated to his work and expertise.
Acfield was born in Southampton and trained and worked in the woollen industry, moving to Newcastle upon Tyne in 1936. He was elected a Fellow of the Royal Astronomical Society in 1945 and later was honoured by the Société Astronomique de France.