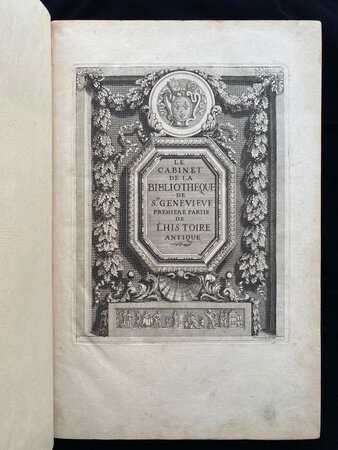 1692. Folio (400 x 260 mm), pp [ii] engraved sectional title, [viii], 183, [1] blank, [ii] engraved section title, 185-224, [8] index; with engraved portrait of du Molinet, engraved vignette with coat-of-arms on title, engraved head-pieces and initials on p. 6 and p. 185, and engraved tail-pieces on p. 152, with 45 engraved plates of which 5 are double-page, and numerous engraved and woodcut head- and tail-pieces and initials; some browning and foxing throughout, with some staining affecting the upper inner gutter throughout much of the work, and quite prominent in places causing paper burn; the whole work with extensive worming, affecting inner gutters, and upper and lower margins of both text and plates (though never touching images), with copious neat paper repairs (too many to list separately) though notably lower corners between pp. 99-113, repairs and worm-trails between pp. 141-180, and in upper gutter between pp. 182-206, some plates somewhat browned, and with a few marginal tears, and the remains of one or two insects still visible; some of the plates with old manuscript numbering and which have been cropped in places at some point; in recent full vellum bound by Bernard Middleton, all edges yellow, spine lettered in gilt, covers a little stained and soiled. First edition. Important and beautifully illustrated catalogue of the famous 17th century wunderkammer, established and curated by Father Claude Du Molinet (1620-1687), and which formed an annexe to the library of the abbey of Sainte-Geneviève, Paris, established by Cardinal Rochefoucauld in 1642. Although a small part of the original collection remains today, much of it was dismantled and dispersed during the French Revolution, and thus the present catalogue serves as the only record of the museum's cabinet of coins, medals, gems and natural history specimens. Du Molinet had first started to amass the collection in the 1660s, before officially installing the museum in 1675. Amongst the many fine engraved plates by Franz Ertinger (1640-ca. 1710), the first seven (including 5 double-page), show the actual interior decoration of the rooms in which the collection was housed, with the main room looking out towards Luxembourg gardens and the church of Saint-Sulpice.
According to the preface, Du Molinet had sought in particular to assemble rare and curious objects of interest to the sciences and history, both ancient and natural. ‘It was thus a teaching collection and an important addition to the library, through which one had to pass before reaching the cabinet of curiosities. The collection was only ten years in the making but received a tremendous boost with the acquisition of the greater part of Peiresc’s collection, which made it one of the most notable cabinets in France’ (Grinke, p. 28). The catalogue is divided into two parts - the first being devoted to antiquities: Christian, Egyptian and Roman; funerary objects; weights and measures; coins; medals; engraved gems; talismans and seals (including a section on Gnostic seals); and lamps. The second part is devoted to natural history objects, divided amongst birds; animals; fish; fruits; plants; shells; stones; and minerals. The cabinet included many oft found curiosities of the time, such as a unicorn horn, and a mermaid hand, Du Molinet relating the stories and legends that were associated with them, even if somewhat sceptical himself. ‘The arrangement of the collection itself is carefully described by du Molinet. Facing the entrance was an alcove with clothes and weapons from Persia, India and America and above this were ranged three tiers of urns, votive objects, lamps, sacrificial instruments and other antiquities. The alcove was flanked with two cupboards of petrifaction's, Indian birds, animals and a collection of footwear from various countries, and above these "buffets" were further shelves of figures, Chinese vases, branches of red, white and black coral and other marine growths. The other three sides of the room contained a dozen walnut cabinets housing the medal collection, with an explanatory book listing over four hundred pieces in the large bronze series. The collection included Greek and Hebrew silver coins, Papal medals and those of the French Kings and other European monarchs, as well as jetons, talismans and coins from China, Japan, India, Siam and elsewhere. Other cabinets contained scientific instruments, semiprecious stones and minerals, shells and rare animals and fishes. The walls were hung with paintings including a series of twenty-two pastel portraits of the Kings of France. Ertinger's excellent plates illustrate the room which housed the collection and also two large views of the interior of the library, with a view of Paris through the open window' (ibid).