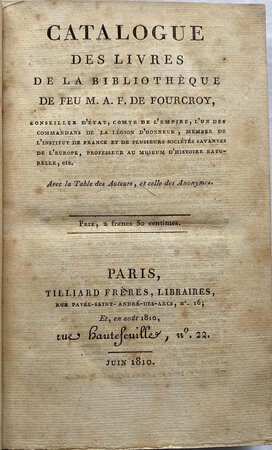 1810. 8vo, pp. [iv], [4] ‘Annonce’ giving times and dates of the sessions of the auction; [v]–xx 338; with duty paid stamp at head of the ‘Annonce’; some light foxing and spotting, but generally clean and crisp; in later nineteenth-century half calf over marbled boards, spine tooled in blind and gilt, with green morocco label lettered in gilt, head and tail of spine nicked and rubbed, lower joint starting to split, extremities lightly bumped and worn with some minor surface wear. First and only edition of this uncommon and important catalogue intended to be used as a bibliography as well as a sale catalogue of the library of the renowned chemist Fourcroy (1755-1809), including a classification scheme and indexes of authors and anonymous titles. Over 2,700 items in Fourcroy’s library are listed, 1800 of which are on science or medicine, with many rare chemical books being listed. It is preceded by a brief biography of Fourcroy including a bibliography of his own works. The sale dates are given in the separately paginated announcement. The library was sold on consecutive days, Monday to Saturday 19 November to 22 December 1810, 29 days in all. Fourcroy’s library is interesting in its own right, but also valuable as it provides a point of comparison with the library of Lavoisier who was his near contemporary and collaborator on the Méthode de nomenclature chimique (1787) which ushered in the chemical revolution. Lavoisier’s library was about the same size, 2,500 titles including pamphlets. Of the 1,746 books (excluding pamphlets) Beretta classifies 844 as scientific and medical (another 145 are on mineralogy and mining and 91 on agriculture and husbandry). According to Peignot, the compiler of the catalogue was François Henri Stanislas de l'Aulnay (1739-1831), the author of a book published in 1786 on Pilâtre de Rozier's antimephitic respirator, upon which he improved.