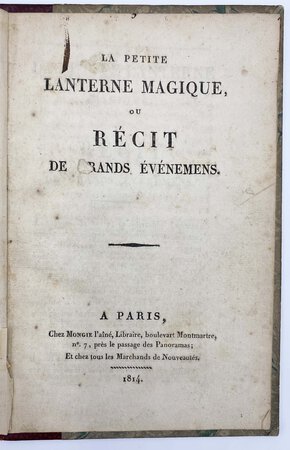 ca. 1814]. Three short pamphlets in one volume 8vo; pp. [ii], 18; pp. 7, [1]; pp. 8; small paper flaw with loss of one letter on first title-page, all three pamphlets lightly foxed and browned; in cloth-backed marbled paper over boards, with hand-written paper label on upper cover, front inner hinge cracked and broken; with small book-label on front paste down. Three uncommon satirical pamphlets discussing the final chapters of the Napoleonic era, and the restoration of Louis XVIII, very much an anti-Bonaparte standpoint and celebrating the restoration of the Bourbons. Following the French Revolution and during the Napoleonic era, Louis XVIII lived in exile in Prussia, England, and Russia. When the Sixth Coalition of Russia, Austria, Prussia, England, Holland, and other smaller states finally defeated Napoleon in 1814, forcing the surrender Paris, and the abdication and exile of Napoleon himself, Louis XVIII was placed in what he, and the French royalists, considered his rightful position. However, Napoleon escaped from his exile in Elba and restored his French Empire. Louis XVIII fled, and a Seventh Coalition declared war on the French Empire, defeated Napoleon again, and again restored Louis XVIII to the French throne. He ruled as king for slightly less than a decade.