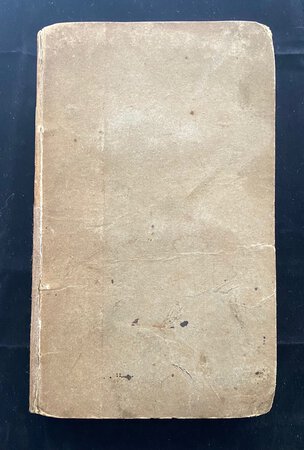 < >
Owned by one of the founding Directors of the Stockton to Darlington Railway
ACCUM, Friedrich.

CHEMICAL AMUSEMENTS, comprising a series of curious and instructive experiments in chemistry, which are easily performed, and unattended by danger. London: Printed for Thomas Boys, 3, Paternoster Row, near Cheapside.

1817. 12mo, pp. [ii] half-title, xxv, [i] advertisement, 191, [i] title-page ‘Descriptive Catalogue’, 59, [i] advertisement; with a couple of small text engravings; a little foxed and dust-soiled throughout, though often marginal, the ‘Descriptive catalogue a little more foxed, with prominent staining affecting lower gutter between pp. 25-48 and from p. 47 to the end of the ‘Descriptive Catalogue’ also affecting final endpaper; uncut in the original publisher’s grey paper boards, with printed label on spine (cracked and somewhat soiled), head and tail of spine worn with slight loss, joints cracked but holding, covers somewhat spotted and a little ink stained, corners and extremities bumped and lightly worn; with the book-plate of Benjamin Flounders [Flanders] on front paste-down; overall a good copy, and uncommon in the original boards. Uncommon first edition, and of appeal being in the original boards. ‘One of the most popular expositions of elementary chemistry of the time, which did much to bring the study of the science to the attention of the general public. The book was “written with a view, to blend chemical science with rational amusement” (preface). Five English editions appeared in quick succession: 1817, 1818 (2 eds.), 1819, and 1821, as well as translations into German (1819, 1824), Italian (1820, 1829, 1854), French (1825, 1835), and Spanish (1836). At the end is A descriptive catalogue of the apparatus & instruments employed in experimental and operative chemistry manufactured and sold by Frederick Accum (1817), comprising a detailed list of the apparatus and chemicals used at the time, complete with prices. Accum supplied apparatus to Harvard and Yale universities and even universities in India. The first edition is very scarce’ (Neville, p. 4-5).
Of the 103 experiments, a considerable number involve the properties of silver and other substances later applied to the photographic process.
Friedrich Christian Accum (1769-1838) ‘came to England in 1793 as an assistant in the firm of Brande, apothecaries to George III. By about 1800 he had his own laboratory and was soon giving lecture courses which proved popular. Accum was one of the forerunners of the developing class of professional chemists, seeing and exploiting the technological possibilities created by the rapid advance of chemical knowledge. He was active as a lecturer, author, merchant, consultant and did fundamental work on gas-lighting and food adulteration’ (Cole, p. 1). Cole notes that the first edition was sold out within two months, leading to Accum to issue the revised and expanded second edition in the following year.
Provenance: Benjamin Flounders (1768-1846) was a prominent English Quaker with business interests in key new industries and developments at the time of the mid-industrial revolution, such as The Stockton and Darlington Railway (of which he was a founding Director) and new canals in his native Northeast of England.