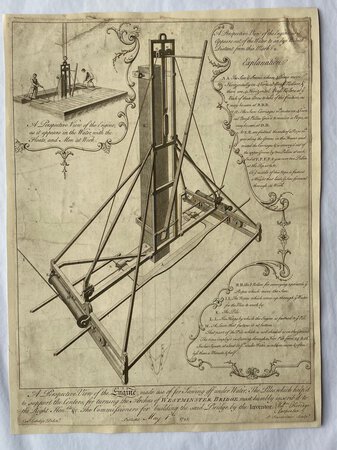 A PERSPECTIVE VIEW OF THE ENGINE made use of for sawing off under water, the Piles which help’d to support the centers, for turning the arches of Westminster Bridge. Most humbly inscrib’d to the Right Honble &c. The Commissioners for building the said Bridge, by the Inventor [in manuscript Willm Etheridge, Carpenter]. Cars: Labelye Delint, P. Fourdrinier Scultp, Published, [in manuscript May 1st] 1745.

1745. Large copper engraved illustrated broadside, mounted on later paper; mount size 482 x 357mm, engraved surface 455 x 341mm, trimmed to within plate mark; with 7cm tear repaired at top left hand side but without loss of image, engraving a little foxed and soiled, but generally a clean example. As the first major bridge built over an English river for more than a century, and only the second masonry bridge over the Thames, plans for the Westminster Bridge immediately attracted great attention. Though the act of parliament granting building permission was passed in 1736, it was not until May 1738 that the Swiss engineer, architect and mathematician Charles Labelye (1705-1781?) was appointed as “chief engineer”, a move that was to cause great hostility amongst the unsuccessful English engineers. The initial design was for a timber superstructure with stone piers and abutments. This was abandoned after damage to the works caused by the severe winter of 1739-40, during which the Thames froze solid. All 140 wooden piles were destroyed. So Labelye produced a design for a Portland stone bridge with 13 large semicircular arches and two small, and work recommenced. Though blighted by delays and controversy, and indeed dubbed by some as the 'Bridge of Fools', it eventually received considerable praise for its elegant structure when it opened on November 18th 1750. The Gentleman's Magazine described it as “a very great ornament to our metropolis, and will be looked on with pleasure or envy by all foreigners. The surprising echo in the arches, brings much company with French horns to entertain themselves under it in summer; and with the upper part, for an agreeable airing, none of the publick walks or gardens can stand in competition.” The project in particular is noted for Labelye’s invention of caissons to support the bridge during construction. These were huge boxes built onshore and then floated into position, and then 'sunk until the bottom rested on the bed of the river, a cavity having been previously excavated for their reception. The pier was then built in the caisson, and when it had reached above the level of high water the sides were removed.. The first pile was driven on 13 Sept. 1738, and the first caisson launched on 15 Jan. of the following year..' (DNB).
At the time of the present engraving, work on the bridge was well underway, though subsidence damage to an arch two years later was to set back the opening for nearly four years. The inventor of the present ‘Engine’ for ‘sawing off under water’, William Etheridge (1709-1776) was a skilled carpenter, engineer and architect from Suffolk, who worked as foreman under the master carpenter, James King, on the project, subsequently replacing him after King’s death in 1744. As well as the underwater saw, Etheridge also invented a battering ram to help strike the centres. He also worked on the Walton Bridge and designed Queens' Bridge in Cambridge. His name and profession has been added by hand to the dedication.