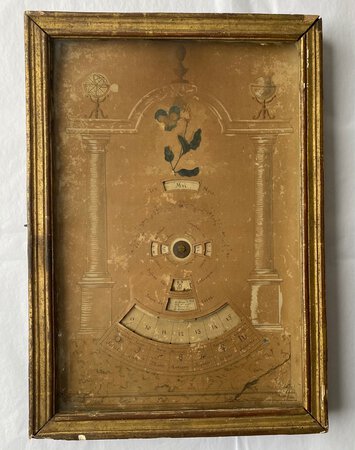 1800. Heavy card sheet, 396 x 265 mm, with eight cut-out windows, neatly drawn in pen and ink (with draughtsman’s pin and guide marks faintly visible), finished by hand in brown wash, with additional green coloured collage of a flower in bloom, with two internal dials/volvelles, the inner 155 mm in diametre, the outer 215 mm in diametre, both neatly lettered in manuscript in brown ink, the inner dial with additional charming hand-coloured illustrations of the signs of the zodiac, volvelles held in place by a later metal disk and brass screw; the calendar itself is quite heavily browned and soiled, notably in the centre of the upper margin, with some small abrasions, slight loss to the collage, small loss to 1cm at lower left margin, the volvelles with signs of rubbing where turned, inner volvelle with evidence of what appear to be contemporary corrections; the calendar set within a heavy oak surround, behind hinged glass ‘lid’ fixed in place with a metal clasp, in an old gilt wood frame 435 x 305 mm, retaining two hanging hooks at the upper margin, frame somewhat knocked and worn, with prominent wood knot internally with some loss, and visible from the rear and which leaves a hole along the top edge of the frame and has led to the central darkening and soiling of upper calendar edge; despite the evident signs of use, nevertheless a charming, neatly executed, and scarce survivor. An evocative and, despite its signs of use, striking example of a paper perpetual calendar, of particular appeal having been skilfully done by hand in ink, brown wash, and hand-colour, seemingly the work of ‘Florent Chausson’, who has signed both of the inner volvelles. The outer ‘clock-face’ has been neatly drawn in pen and ink and finished in brown wash. A closer inspection reveals and small pinned guide-marks used by Chausson with his draughtsman’s tools. An ornate arch design is supported by twin columns on a faux-marble base, and is surmounted by a finial and a fine armillary sphere and globe. A green paper collage of a flower in bloom has also been added. Eight ‘windows’ have been neatly cut out. Attached by a later central pin, are two ‘dials’ or volvelles, the outer marked by hand with days of the month which can be set against a fixed scale of days of the week marked on the front board, this latter scale noting both the day, its corresponding planetary symbol, and planet name. The inner volvelle rotates independently, and is set to the month. Relevant information is then visible in six windows: the time of sunrise (being the average for that month), time of sunset, length of day, length of night, Zodiacal sign symbol (beautifully drawn and hand-colored), and list of the principal feast days. An unusual, charming, and skilfully executed work of art and science. By its very fragile nature and design, a rare survivor, despite the signs of wear: proof, if needed, that it was indeed well used and served its’ purpose!