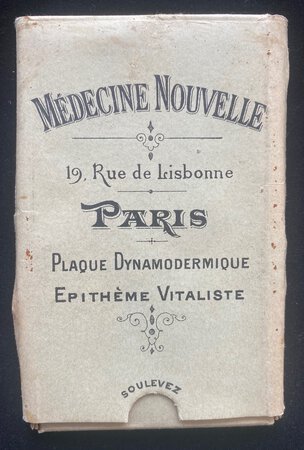 1890-1900. Oval composite plaque made from brass and nickel?, 70 x 115 x 1 mm, with horizontal central moulding, both sides engraved; together with pp. [4] folded explanatory leaflet 212 x 135 mm, further folded down into four; paper a little browned; plaque slightly burnished; retained within the original printed card box, 120 x 80 x 7 mm, box a little foxed and soiled, with minor rubbing and wear to extremities; a very good example. A scarce medical curiosity - a French Vitalist-Mettalotherapeutic device from the turn of the century, made from brass and seemingly nickel, patented and made by the ‘Société Électrogénique’, established in the mid 1890s by Eugène Legras (1856-?) and Édouard Moron (1850-1909). Particularly appealing, the device is housed within the original card box, and retains the printed explanatory relief, which guarantees the user of its authenticity and not a counterfeit. Recommended for the treatment of all pain by application to sensitive areas, and by extension supposed to cure all internal diseases, the plaque, sold for 4 francs, and was designed to be attached to clothing, and in particular night-gowns, patients recommended to keep between 3 and 7 plates close to the skin during the night, the number depending on the severity of the ailment.
Different metals are known to generate small electric currents when brought together, and this was thought to confer healing properties when held against the skin. The French physician Victor Burq, in around 1849, discovered that placing various metals on the bodies of female patients being treated for hysteria, triggered various physiological, muscular and nervous reactions, and in a number of instances seemed to offer some kind of cure. Thus ‘mettalotherapy’ was born, and Burq’s work soon became quite influential and was adopted by many contemporaries. Innumerable electro- or magnetotherapeutic pendants and devices were developed by physicians, chemists, and businessmen at the time, often without much medical knowledge, and were widely marketed across both America and Europe at the end of the 19th century when electrotherapy hit its peak. We have previously held pendants patented by E. Osselin and Joseph Raspail.
In late 1881 Charles Pinel (1828-1895, son of Scipion, and brother of Philippe), founded the first l’Institut d’Electrothérapie together with a colleague, with the commercial aim of distributing metal plates for medical use, called ‘dynamodermic plates’, so called because of the reactions they caused during application to the skin. An exponent of vitalism, the company expanded rapidly, but Pinel died unexpectedly in 1895, at which point Eugène Legras and Édouard Moron, neither men physicians, became involved. Moron appears to have used a number of pseudonyms, including Doctor Édouard de Monplaisir (named after a district of Sainte-Radegonde where his parents lived), Doctor Sosthène Faber (used in particular at the Rochecorbon Sanitorum they established in 1901), E. de Salerno, and De la Palette. Legras, whose name appears at the end of the present instruction leaf, oversaw the financial side of the business, which seemingly was renamed the Dynamodermic Institute and later the Electrogenic Society. Clearly two entrepreneurial men, the business became very successful, thanks to prominent advertising in local, national and international newspapers, the creation of ‘Le Médecine Nouvelle’ Journal, and through a prestigious establishment in a Paris mansion at ‘19, rue de Lisbonne’, where as the instruction leaf reveals, free consultations were available from both ‘Dr. Péradon’, chief vitalist physician, who would also give correspondence consultations, as well as from the Director, ‘Dr. Dumas’. Personal consultations were given every day between 10am and 5pm. The sale of devices such as the present ‘plaque dynamodermique’ no doubt helped to pay for this free service. Demand was so strong that a production plant is established in Vernou-sur-Brenne, as noted on the present example. Priding itself on relieving and even curing a multitude of both nervous and physical diseases (including tuberculosis and cancer), the company prospered for more than 20 years, eventually opening their famous Rochecorbon Sanitorium in 1901, in Château de la Tour, on the outskirts of the town. Fortunes quickly changed however, and by 1905 the company had been declared bankrupt, although Legras and Moron, under the pseudonym of Doctor Sosthéne Faber, continued to run the Sanatorium until 1909, when Moron died. Despite attempts by Legras to keep the sanatorium going, it had closed by the start of WWI, when it was used as a military hospital.
Later examples of the ‘plaque dynamodermique’ were engraved ‘Rochecorbon’, and were used extensively as part of treatment plans.