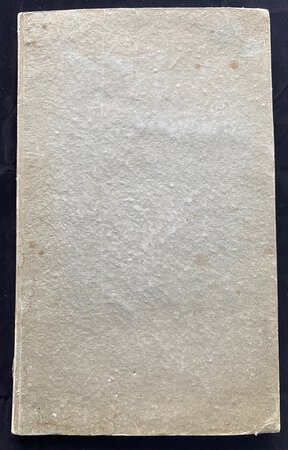 1840. Two parts in one volume, small folio; I. ff. [1] title-page, [1] blank, 25 samples on 13 leaves, sample 25 in small paper envelope, sample 17 no longer present; II. ff. [1] title-page and ‘Fautori’, [1] blank, a further 25 samples (nos 26-50) on 12 leaves, samples 41, 47 and 50 in envelopes; each sample with small typed label mounted below; a number of samples somewhat fragile, so only partially remaining, but predominantly intact; some offsetting caused by samples, notably to first title-page; small hole in first blank, paper a little browned throughout with some occasional minor finger-soiling; with a few small neat manuscript corrections in brown ink; in contemporary blue paper-backed boards, title in ink on spine, head and tail of spine bumped, joints a little rubbed and worn with minor loss of paper, most prominent at tail of upper joint, some minor dampstaining evident, covers lightly spotted and scuffed, extremities a little rubbed and worn; three contemporary signatures on front paste-down, two dated 1843 and 1847, though neatly crossed out; a good copy. A rare, albeit somewhat fragile, mid 19th century scientifically published album of Scandinavian algae specimens, containing 50 mounted dried examples, gathered by the noted botanist and phycologist John Areschoug (1811 - 1887), Associate professor of botany in Lund from 1839, and professor of botany at Uppsala from 1859, and who made a special study of algal flora of Scandinavian coastlines and of the Bohuslän archipelago in particular. He was one of the first at Uppsala to give practical lessons in microscopy. The red algae genus Areschougia from the the family Areschougiaceae is named in his honour.
The delicate samples have each been carefully mounted on paper, with some of the smaller examples folded into smaller paper envelopes for added protection - 25, 41, 47 and 50, with 41 and 47 seemingly microscopic slide preparations. Only sample 17 appears missing, though a number of samples are only partially complete, emphasising the fragility of such collections. At the bottom of each leaf has been mounted a printed label, giving the number, name, physical and geographical location, and month in which they were collected: ‘1. Fucus serratus Linn. Mollsund Bahsusiae – Aug’. For the most part, however, the specimens still retain their vibrant colour and texture, a great variety of species on display, of various shapes and sizes, some being almost transparent, others far more robust, with a couple partially calcified. They retain an elegance and beauty, and one can easily imagine them once floating in the sea.
Further parts were to follow, all of which are scarce, the third part containing samples 51-84 being published in the following year, though which is not present here. In total, according to the University of Auckland, the series ran to 12 volumes, concluding in 1879.
A contemporary review in ‘Botaniska Notiser för å 1839 och 1840’ (1841) provides some interesting insight into the issues surrounding the publication of such a work, stating that Areschough had previously attempted to published a dried collection of Scandinavian algae, but which did not reach ‘bookstores on the ground that he did not have a sufficient number of instructive specimens of all the species’. He therefore began a new collection, of ‘well-chosen’ specimens, in the words of the reviewer.
He is probably best remembered for his 1850 work Phyceae Scandinavicae Merinae.