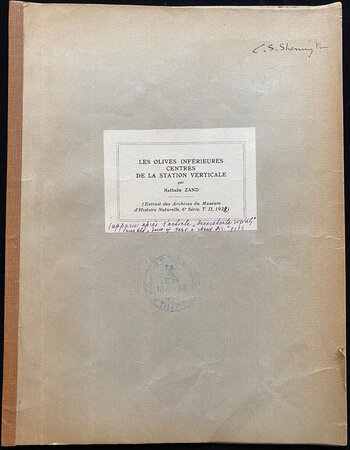 1928. Presentation Offprint: 4to, [169] - 178; with six half-tone figures; paper somewhat browned due to quality, with some minor edge wear and nicking along fore-edge; ex-libris of the Royal College of Surgeons of England, with their stamp at head of first leaf and on upper wrapper; in grey card wrappers, with later linen back-strip so retaining the original upper cover with printed paper label, though with replacement rear cover, upper cover somewhat browned with small tear to fore-edge; presentation copy signed at head of title-page by Zand, with a further authorial note at tail of printed label. Presentation offprint, an an ‘extrait des Archives du Muséum d’Histoire Naturelle, 6e Série, T. II’ (printed label). A scarce neurological work by the Polish Jewish neurologist Nathalie Zylberlast-Zand (1883-1942), described by Esther Lovejoy as ‘a physician of outstanding ability’ (Women Doctors of the World, p. 174), and who, as highlighted by the present article, worked closely with the noted neurologist Edward Flatau (1868-1932).
Zand gained her medical diploma from the University of Geneva under the supervision of Eduoard Martin, and also passed the state examination at the National University of Kharkiv in Ukraine. She ‘specialised in the pathology of the central nervous system, and contributed to the literature on this important subject. Her papers were published not only in Poland but also in France and England. In 1935, she reported that about 15 per cent of the physicians in Poland were women, four of whom held the title of docent on the Medical Faculty of the University of Warsaw. Dr. Zand represented the Medical Women’s International Association at the Congress of the International Federation of University Women held at Cracow in 1936, and the following year she was a delegate to the meeting of the Medical Women’s International Association at Edinburgh. Nationally and Internationally, she was interested in the professional and political status of women - too interested perhaps. “Polish medical women are firmly convinced that equality of rights should be strictly maintained and take active steps whenever their rights seem to be threatened” was one of her last recorded pronouncements. That was dangerous doctrine. Dr. Zand and Dr. Garlicka were among the thousands of freedom-loving people who “disappeared” during the debacle which followed the invasion of Poland by Germany and the Soviet Union at the beginning of World War II’ (ibid). Research subsequent to Lovejoy’s work of 1957 has discovered that Zand and her husband were forced to live in the walled Warsaw ghetto, during which time she continued to work as a physician. Sometime around September 24th 1942 she was deported to Pawiak prison in Warsaw where she is believed to have been executed.