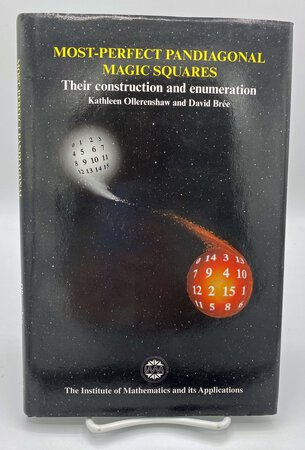 < >
Written at the age of 85 and published to International Acclaim
OLLERENSHAW, Dame Kathleen and David S. BRÉE.

MOST-PERFECT PANDIAGONAL MAGIC SQUARES: their construction and enumeration. The Institute of Mathematics and its Applications. Printed in Great Britain by the University Press, Cambridge.

1998. Large 8vo, pp. xiii, [i], 152, [10] templates; clean and bright; in the original black publisher’s cloth, spine lettered in gilt, with the original dust-jacket, unclipped with only minor edgewear; a presentation copy from the author ‘To Michael and Vivien just to “see”. This is what brought the “fame” (see page 89). Kathleen, 15 July 2005’; a very good copy. First edition and a presentation copy, with a charming self-deprecating inscription, of this important work by the leading British mathematician and politician, Dame Kathleen Mary Ollerenshaw (1912-2014), written when she was 85, and published to international acclaim, providing for the first time an algorithm for constructing a whole class of magic squares as well as a formula for counting their number.
‘Ollerenshaw's interest in the mathematical theory of magic squares also began in the early 1980s. A magic square of order 4 is one in which in the numbers from 1 to 16 are arranged in a 4x4 array in such a way that the sum of each row, each column, and the two main diagonals add to the same total. Perhaps the most well known 4x4 magic square is the one depicted in the painting Melancholia by Albrecht Dürer. The 17th century amateur mathematician, Bernard Frénicle de Bessey, determined that there are exactly 880 essentially different 4x4 magic squares, i.e. squares that cannot be obtained from one another by rotations or reflections. He did this by an exhaustive search, listing all 880 possibilities. Ollerenshaw and Hermann Bondi, a prominent cosmologist and mathematician, developed an analytical construction of the squares, thereby verifying the number 880. They published their results in a 1982 paper in the Philosophical Transactions of the Royal Society... which was reprinted a year later as a book... Ollerenshaw worked on most-perfect pandiagonal magic squares for over eight years. In a 1986 paper she made use of symmetries to determine that there are 368,340 essentially different such squares of order 8. Slowly she figured out how to construct and how to count the total number of squares, first for those whose order is a power of 2, then for squares who order is a multiple of a power of 2, and finally, after another four years of work, for all most-perfect pandiagonal magic squares with order a multiple of 4. Professor David Brée, the head of Artificial Intelligence in the Department of Computer Science at the University of Manchester, assisted Ollerenshaw in organizing, proof-reading, and putting her research notes into an appropriate form to be published as a book. Most-Perfect Pandiagonal Magic Squares: Their Construction and Enumeration was published in 1998 to international acclaim and provided for the first time an algorithm for constructing a whole class of magic squares as well as a formula for counting their number, a remarkable accomplishment for a woman of age 85. In her "personal perspective" at the end of the book, Ollerenshaw writes:
"Only now, with the work complete, is it possible for me to look back and see the process as it developed, savouring in retrospect the challenge presented when proof was first attempted, and recalling each step of the astonishing mathematical adventure that it has been...The manner in which each successive application of the properties of the binomial coefficients that characterize the Pascal triangle led to the solution will always remain one of the most magical revelations that I have been fortunate enough to experience. That this should have been afforded to someone who had, with a few exceptions, been out of active mathematics research for over 40 years will, I hope, encourage others. The delight of discovery is not a privilege reserved solely for the young."’ (Larry Riddle, Agnes Scott College, Atlanta, online biography).
Ollerenshaw (née Timpson) studied mathematics at Somerville College, Oxford, and completed her doctorate in 1945. She was President of the Institute of Mathematics and its Applications from 1978 to 1979. Ollerenshaw published at least 26 mathematical papers, her best-known contribution being to most-perfect pandiagonal magic squares. Upon her death, she left a legacy in trust to support distinguished research visitors and public engagement activities at the School of Mathematics, University of Manchester. An annual public lecture at the University is named in her honour.
An amateur astronomer, Ollerenshaw donated her telescope to Lancaster University, and an observatory there bears her name. She was an honorary member of the Manchester Astronomical Society and held the post of Vice-President for a number of years. Dame Kathleen was Lord Mayor of Manchester from 1975 to 1976, and was an advisor on educational matters to the Thatcher government during the 1980s.

Bibliography: For a detailed biography of her life and work see https://www.agnesscott.edu/lriddle/women/ollerenshaw.htm.