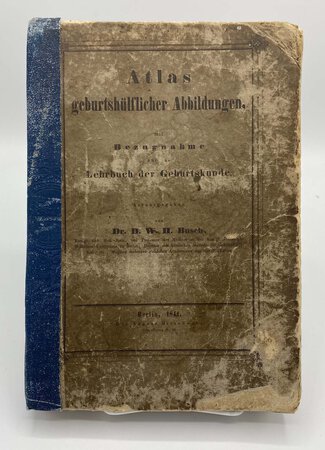 1841. Large 8vo, pp. xiii, [i], 148; with 49 lithograph plates; pp. 25/26 misbound after p. 30 and partially adhered to p. 30, with small paper tear; printed on poor quality paper and heavily foxed throughout as usual, with some sporadic marginal dampstaining, and evidence of finger-soiling throughout in lower right-hand corner, a couple of gatherings a little loose; with faint and sadly illegible signature in pencil on title-page, dated ‘1846’; scarce in the original printed boards, though somewhat shaken and with book-block and gatherings sitting somewhat proud along fore-edge, rather crudely rebacked in blue cloth, faded and lightly rubbed, covers soiled and scuffed, heavily in places and with loss of paper at tail of upper cover, extremities and corners bumped and worn; despite wear, a sound copy and clearly used and appreciated by a former owner. Uncommon first edition, and unusual being in the original printed boards, of this concise and excellent obstetrical manual and lithograph atlas, each chapter discussing a specific plate, each of which themselves contain a number of figures. Amongst other things, the fine plates show various pelvises and the various stages of pregnancy, but concentrates primarily upon the delivery itself, highlighting numerous different presentations. In a number of these where instruments (mostly forceps) would be needed, their use is illustrated. The Caesarean operation is also represented in two plates (plates 47 and 48), the first of which shows the abdomen with five different types of incision indicated.
Busch was one of the earliest obstetricians to recommend episiotomies: he himself confined their use to cases of 'organic anomalies' and was wary about other surgeons using the procedure too freely and inappropriately. He was the author of several noted works, including an earlier noted text-book and atlas ‘Die theoretische und practische Geburtskunde durch Abbildungen erläutert’, and ‘Atlas der in funfzig lithographirten Tafeln’ both published in 1838.
As with previous copies of the first edition handled, the present copy is quite prominently foxed and soiled, due to the paper quality. It has also clearly been extensively and frequently used by the previous owner, suggesting it was considered to be a valuable reference source and text-book.