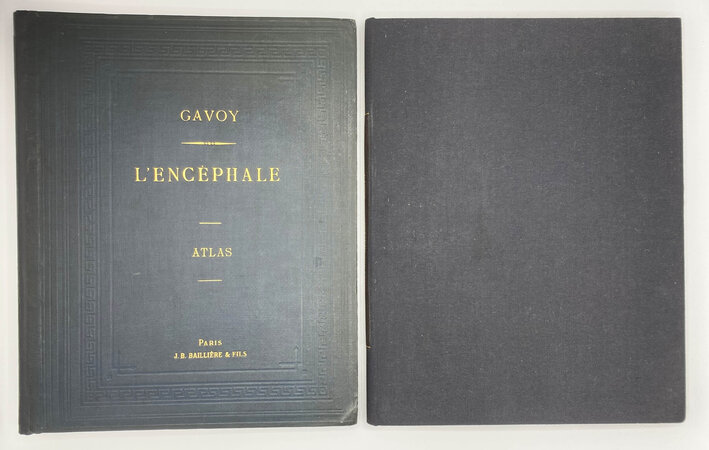 1886. Mixed set, together two volumes, text and atlas, small folio; text: pp. viii, 160; atlas: pp. [iv], with 59 glyptographs numbered A-D and I-LV; front free endpaper and half-title of text volume with some marginal dampstaining, lightly browned throughout with occasional light spotting and foxing, but otherwise generally clean; atlas also somewhat browned throughout due to paper quality, fore-edge of planche A nicked with japanese paper repairs to verso, and with library stamp on half-title ‘Royal College of Surgeons Library Ireland’; text volume bound in recent black cloth, with new morocco label on spine lettered in gilt, with the original printed wrappers bound in (dampstained and with signs of repairs), atlas volume in contemporary blue cloth, neatly rebacked preserving much of original spine, with new endpapers, and inner hinges strengthened, upper cover ruled and lettered in blind and gilt, covers slightly stained, extremities lightly rubbed and worn, mainly at corners. Uncommon first edition of notable work of neuro-anatomy by Émile Alexandre Gavoy (1836- ca 1896), with 59 striking life-sized plates drawn from nature by the author and printed using a method of etching called glyptography.
Gavoy received his medical doctorate in Strasbourg and made a career as a military doctor, and indeed was to publish a number of works relating to military medicine, most notably his account of his experiences during 1870-1871, Étude de faits de guerre. Le service de santé militaire en 1870. Hier, aujourd'hui, demain. (1894).
It is for his neuro-anatomical works, however, for which he is perhaps best remembered, having carried out numerous researches in this field throughout his career. In 1882 he published his Atlas d’Anatomie Topographique du cerveau et des localisations cérébrales’, containing 18 life-sized chromolithograph plates of the brain, and for which he obtained an honorable mention at the Montyon Prize.
The present work includes a highly complimentary prefatory letter from the noted French neurologist Professor Alfred Vulpian (1826-1887), who writes: ‘You have done an important work here, not only by the number and the beauty of the figures, but also and above all by the evident sincerity with which you have reproduced the texture of the brain. I admire the talent and the prodigious amount of work of which these plates are indisputable proof; I am even more seduced by the personal character of these plates... It is not difficult to recognize that you have done better in many ways than your predecessors’. A contemporary advertisement in L’Encéphal: journal des maladies mentales et nerveuses, p. 256, reveals that the work was originally available for purchase in five parts.