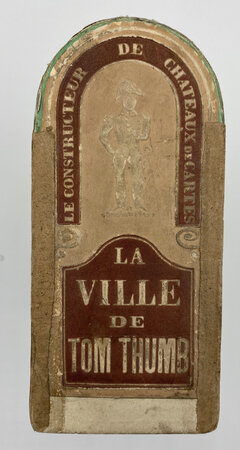 1850. Decorative arched box 137 x 135 x 65 mm, containing within a nest of 10 decorative paper and card ‘buildings’, in a variety of colours, each with some embossing to create building facades and highlight architectural features, with other details printed in lithography; generally bright and vibrant, though each with some light soiling and signs of light rubbing and wear, the ‘butchers’ shop with tear at one lower edge, old tear neatly repaired to side panel of the ‘cafe’, with a couple of further small tears visible; arched box covered with patterned green paper, lid with paste label with embossed title lettering and embossed image of Tom Thumb, presumably in his role as Napoleon Bonaparte, some loss of paper, covers a little soiled and darkened, with some light rubbing and wear to extremities; otherwise very good. An extremely rare and charming architectural toy - perhaps an early precursor to the Russian Matryoshka doll - depicting ‘La Ville de Tom Thumb’. Nesting within the decorative box are found ten buildings - working from the inside outwards - a clothes shop, a watch and clock maker, a wine merchant, a post office and hairdresser, a Café de la Promenade (offering sherbets and ice creams), a butcher and cobbler, a grocers, a tobacconist and bakery, the town-hall, and finally the church. All are made of stiff embossed card, with the architectural and other features printed in colour lithography. We presume that the buildings were already constructed upon purchase, but it is possible that they have been folded and ‘constructed’ by a previous owner.
We assume that the toy was inspired by, and was possibly a souvenir from, one of several European tours undertaken by P.T. Barnum and Charles Sherwood Stratton - more famously known as ‘General’ Tom Thumb. Standing at only three feet tall, Barnum employed Stratton from a very young age, training him to become a mimic, comedian and entertainer. Much debate remains today about the ethics of this relationship, but Stratton enjoyed great popularity and success. During his first tour to Europe in 1845 he performed in front of, and charmed, Queen Victoria. One of a number of tours of France soon followed, and his impersonation of Napoleon Bonaparte became popular.

Bibliography: We know of one further example in private hands, which may be a variant, with additional steeple, though the present example gives no indication of one being required.