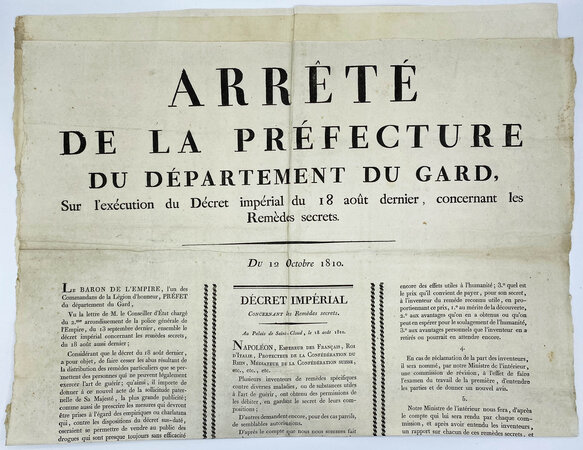 1810. Large letterpress broadside, 785 x 535mm, printed on two single sheets of laid paper and then neatly adhered together horizontally in the centre, text in three columns, with two vertical geometric woodcut dividing borders, some light foxing and soiling, evidence of previous horizontal and vertical folds, some creasing, uncut with some minor edgewear, and evidence of previous later mount on verso at tail, and with contemporary title in brown ink ‘remedie secrets’ on verso; a lovely example. A scarce survivor and fine example of this Imperial decree issued to regulate the secret remedy in France, of importance in the history of proprietary remedies. This large letterpress broadside, printed in three columns on two on two sheets and joined together, has been printed in Nîmes in the Gard department of Southern France.
Matthew Ramsey, in his essay ‘Property Rights and the right to health: The regulation of Secret Remedies in France, 1789-1815’ (Chapter five of ‘Medical Fringe and Medical Orthodoxy’ edited by W Bynum and Roy Porter, Routledge, 2019) provides a detailed and fascinating account of the various attempts to regulate Secret Remedies, a contentious issue which attempted to balance, often rather precariously, the Enlightenment ideals of the right to property with the right to health. ‘The complexities of the relationship between fringe and orthodox medicine in the late eighteenth and early nineteenth centuries are nowhere more apparent than in the history of proprietary medicines, or remèdes secrets, as they were known in France. Such remedies were neither officinal (standard preparations from the pharmacopoeia that the apothecaries kept in stock) nor magistral (compounded according to a physician’s prescription for a particular case). As the French term indicates, their formula was a trade secret; and as the English term suggests, this secret was the property of the inventor or other owner who exploited it commercially’. Such preparations had flourished and abounded for centuries, though had long fallen foul of physicians and apothecaries, who opposed quack doctors or healers. Since an absolute prohibition was not a practical possibility, state regulation of some form was the only answer. As early as 1352 a Royal Edict was passed in France in 1352 which forbade preparations of secret remedies, but over the centuries many were authorized through warrants, and they continued to flourish. The 18th century, however, saw more concerted efforts to control the secret trade, notably after the French Revolution during wider efforts to regulate the Medical Professions and suppress abuses which threatened public health. Yet this insistence on regulation, and notably restrictions on the development and distribution of secret remedies, ran counter to the overriding principles of intellectual and economic freedom, and whilst several decrees were passed between 1789 and 1815, ultimately it was not until 1926 that secret remedies were abolished in France. Property rights overrode concern for public health.
The first decree of note was that of 1803, the ‘Germinal Law’, which followed a few weeks after law regulating medical practice, and was primarily concerned with the education and licensure of pharmacists and the repression of illegal practice of pharmacy. In October of that year a commission was organised, and a set of instructions prepared for owners of secret remedies who had to comply with the new law. It did not expressly ban the sale of secret remedies altogether, however, and was again something of a compromise. Whilst there were prohibitions on advertising or hawking them, subsequent decrees, including one of 1805 actually confirmed the rights of vendors whose remedies had been approved by the government, and in some cases reasserted rights and privileges previously granted under the patents law of 1791. Approved remedies could be sold in Paris and the provinces if they were authorised by local officials; and though to be submitted before the commission, vendors were not obliged to divulge their secret.
As the present Imperial Decree demonstrates, despite the best efforts of the authorities, the secret remedy trade continued to flourish in all its forms. This final effort sought to free society of secret remedies, and its declared purpose was to disseminate knowledge of good remedies whilst discouraging the sale of bad ones. The state would buy and make public the recipes of useful compositions, asserting that it was the duty of owners to co-operate in having them published. All previous permissions would be nullified. Proprietors would submit their recipes to the Minister of the Interior, together with an account of their use and a record of clinical experience to date. A five member commission was established, including three professors from the faculties of medicine, and headed by the distinguished anatomist François Chaussier, professor at the Paris faculty and an authority on medical jurisprudence. As laid out in the present decree, this commission would determine whether the remedy was harmless; if harmless, whether it was useful; and if useful, what price should be paid to acquire it. Once a remedy had been approved, the minister would negotiate an agreement with the inventor, and once confirmed by a State Council, the formula would be published. No inventor would receive an approbation if he insisted on keeping his remedy secret. The law’s larger intent, was not only to protect the public health, by preventing the use of drugs that had no value or contained unknown substances, but also to ‘spread enlightenment’ and ‘discourage charlatanism’.
In the end, however, this 1810 attempt also miscarried, once again compromised by the government’s respect for the inventor’s or owner’s interest and rights to his remedy. ‘In Napoleonic France, the right of property remained ‘inviolable and sacred’; it could and often did outweigh the claims of public health. Although the regimes that followed the First Empire were to create other regulatory institutions, this retreat from the Enlightenment commitment to end secrecy in therapeutics set the pattern for the rest of the century and beyond’ (Ramsey p. 81).