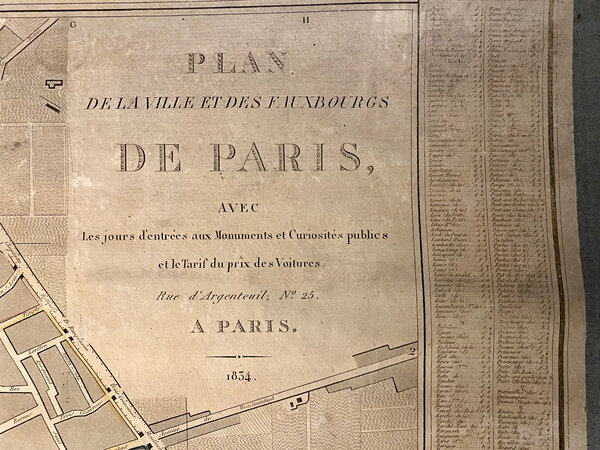 1773. Large engraved map and plan, 85.5 x 57.5 cms, lined and mounted on strong paper, and with original walnut upper hanging frame and roller attached to lower edge, partially hand-coloured in blue, yellow and pink; map lightly abraded in a number of places, with some loss of text and lettering, lightly soiled and browned; still an appealing example. Appealing map of the city and suburbs of Paris, issued during the reign of Louis Philippe (1773-1850), giving details about the days of entry to public monuments and sites of interest, together with vehicle tariffs. An alphabetical directory of streets is also included - though these have been somewhat abraded in places affecting legibility.
The reign of Louis Philippe (1830-1848) is known as the July Monarchy, having succeeding to the throne after the July Revolution and the abdication of Charles X. He followed conservative policies, especially under the influence of French statesman François Guizot during the period 1840–1848. He also promoted friendship with Britain and sponsored colonial expansion, notably the French conquest of Algeria. His popularity faded as economic conditions in France deteriorated in 1847, and he too was forced to abdicate after the outbreak of the French Revolution of 1848.